The Denver Nuggets and probable NBA MVP Nikola Jokic have a tough test to begin the 2021 playoffs against Damian Lillard and the Portland Trail Blazers.

Jokic and Co. won the season series 2-1, and that last win was with Denver sitting its starters for the vast majority of the regular-season finale. Portland had to fight to avoid the play-in tournament, and has two legitimate defeats to the Nuggets on its resume.

Here are four keys to this upcoming first-round Western Conference playoff series between the third-seeded Nuggets and No. 6 Blazers that should be as competitive as any matchup around the league. 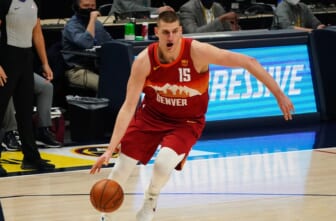 When Jamal Murray went down in mid-April with a torn ACL, the Nuggets were discounted by many, but maintained their composure and had multiple players step up to pick up the slack.

One lingering concern, though, is how few viable guards Denver has to square up with Lillard and CJ McCollum. This is arguably the best offensive backcourt in the NBA this side of Kyrie Irving and James Harden, so the Nuggets have a tough assignment.

Will Barton is a solid wing defender, and Michael Porter Jr. is continuing to make strides, but in terms of pure guard play, Denver will be counting on the likes of Monte Morris, Austin Rivers and Facundo Campazzo in a big way. That’s not the most promising defensive platoon to check Lillard and McCollum with.

Blazers must find ways to slow down Nikola Jokic

In the regular-season finale, Jokic barely played 17 minutes, yet still scored 21 points. He faced the Blazers twice this year before then, and was dominant on each occasion.

Jokic hit two clutch free throws to help the Nuggets secure a 106-105 win over Portland on April 21, and had 25 points, nine rebounds and five assists. Less than a month ago, in another Denver victory, Jokic lit up the Blazers in scoring 41.

Jusuf Nurkic is really the only big Portland can throw at Jokic to even competently match up with him. Frontcourt depth is a huge issue for the Blazers. They’re much more small-ball-centric, and although Nurkic missed the game where Jokic went off for 41 points, he won’t have much help beside him in this series.

The NBA trade deadline was extremely active this year, and two of the biggest moves happened to involve the Nuggets and Blazers.

Norman Powell went from Toronto to Portland, while Aaron Gordon got out of NBA purgatory in Orlando and went to a far more favorable situation in Denver.

Powell hasn’t been quite as efficient with his new team as he was with the Raptors, but that suggests he could be in for a big playoff series. The Blazers will definitely need it, as Powell can take a lot of pressure off Lillard and McCollum if he’s knocking down shots from the outside.

As for Gordon, he’s a competent offensive player, but it’s more about what he brings to the defensive end of the court for the Nuggets. Gordon is extremely versatile and capable of guarding nearly every position. His size could pose problems for the Blazers’ dynamic backcourt duo on switches, and should limit some of their pick-and-roll effectiveness.

If he really shows out in his first real opportunity to get out of the postseason’s first round, Gordon could be the ultimate defensive difference-maker.

Murray’s major injury could’ve derailed the Nuggets’ season. Instead, thanks largely to Jokic’s MVP-worthy performance, Denver closed out the season 13-5 to secure the No. 3 seed.

But somewhat lost in the obviously devastating news about Murray and all the MVP hype surrounding Jokic has been the emergence of Michael Porter Jr.

Although he flashed this ability in the Orlando bubble last year and showed steady improvement throughout the season, it wasn’t until Murray went down that Porter was thrust more prominently into the spotlight. And was he ever ready to seize the opportunity.

You could argue Porter has already had his coming-out party, but now that the playoff stage is here, he’s got a chance to be a matchup nightmare against an opponent in Portland who ranked second-worst in defensive rating this season.