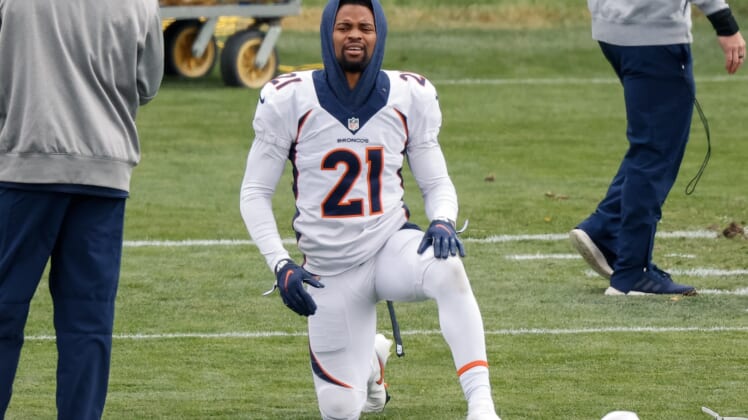 Denver Broncos cornerback A.J. Bouye will be suspended by the NFL for violating terms of the league’s performance-enhancing drugs policy.

Bouye isn’t the first player in recent weeks to be facing a suspension for PED use. There seems to be a pattern that suggests a larger problem, tying back to the Houston Texans organization.

Not to get too conspiratorial here, but it is worth noting the way that KOA Colorado reporter Benjamin Allbright framed his breaking news, with the suspension itself being confirmed by ESPN’s Adam Schefter:

But the reason Allbright’s reporting and context are so notable is because Bouye began his career with Houston, and was teammates with Will Fuller during the wide receiver’s rookie season. Cornerback Bradley Roby started out with teh Broncos before moving to the Texans.

Both Fuller and Roby are serving PED suspensions, and the way this is being reported by Allbright, there’s a suggestion of a link to Bouye’s case. Fuller explained in an Instagram post that he sought offseason medical treatment, and took a substance his medical professional didn’t believe was banned by the NFL. Turned out, it was.

So, there’s no one responsible for these players putting banned substances in their bodies but the players themselves. At least that’s the case so far. The implication here is that Bouye’s prospective suspension may expose a larger story that is halting these players’ careers when such an outcome could’ve been avoided.

It’s been a rough first year with the Broncos for A.J. Bouye since getting traded from Jacksonville prior to the 2020 campaign.

A dislocated shoulder caused him to miss several games, but Bouye has been generally effective when in the lineup, logging 23 combined tackles and six passes defensed in seven starts. If Bouye is suspended, his season is over.

The Broncos continue to sport a top-10 pass defense in the NFL despite managing only a 4-8 record through Week 13. Their stature will probably take a hit with Bouye headed out.

Denver has a decision to make this coming offseason as it is regarding Bouye, who’s scheduled to make $13 million next season, per Spotrac, yet if the team releases him, he won’t count at all as a dead cap hit.

The circumstances surrounding the 29-year-old’s impending suspension will likely play a role in determining whether the Broncos will retain Bouye for his prospective contract year. He’s already going to miss the first two games of 2021, though, unless he were to win some kind of appeal.