The Indiana Fever extended the WNBA‘s longest active losing streak this season following an 89-64 loss to the Dallas Wings.

Indiana’s loss breaks a franchise record for their longest losing streak in a season being their 11th straight.

The Indiana Fever now drop to 1-15 on the season making them the only team in the WNBA yet to win at least two games. Meanwhile, the Dallas Wings improve their record to 7-8.

Six players scored in double figures for the Dallas Wings with Satou Sabally leading with 15 points, nine rebounds and two blocks. Marina Mabrey and Allisha Gray each came off the bench to score 14 and 13 points respectively.

Charli Collier, the Wings’ second overall pick in the 2021 draft, scored in double figures for just the second time this season finishing with a season-high 12 points and seven rebounds. Arike Ogunbowale and Isabelle Harrison each scored 10 points. 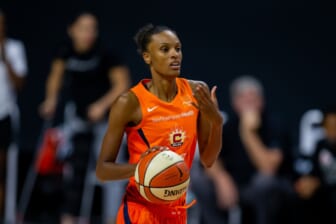 The Wings never trailed in the game blitzing the Fever to a 12-4 lead within the first three minutes of the first quarter ending the period up double digits. They would keep their double digit lead for the remainder of the half leading 43-24 at halftime.

Satou Sabally helped pace the Wings scoring all 15 of her points in the first half. The difference in shooting from the field played a huge role in the Wings dominant first half shooting 50% to the Fever’s 26%.

In the third quarter, the Fever began to go on a run getting the lead down to 50-42 led by Kelsey Mitchell scoring 14 points in the period. However, they were unable to get any closer than that with the Wings outscoring the Fever 39-22 for the remainder of the game.