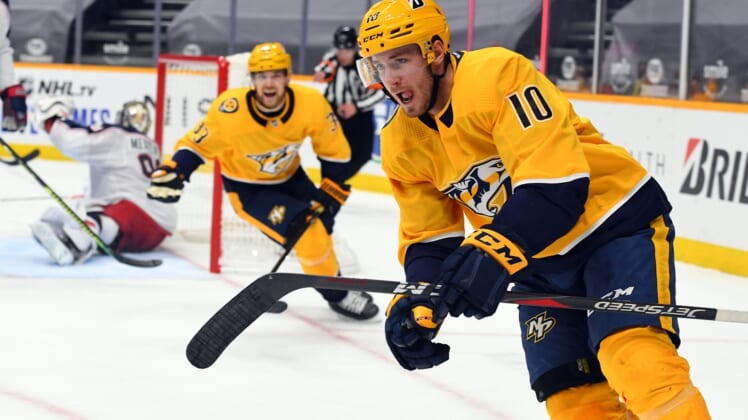 After COVID-19 hampered the start to their season, the Dallas Stars are finally ready to go.

Opening the season against the Nashville Predators on Friday night presents an immediate challenge.

After reaching the Stanley Cup Final last season for the first time since 2000, the Stars were naturally eager to get going in 2021. However, COVID-19 issues within the club forced Dallas to postpone its first four games. Now that the all-clear sign has been given, the Stars can focus on some real competition.

“We’ve done a good job of getting through all of this,” general manager Jim Nill said. “I credit the players and coaches for dealing with all of it professionally. So, I feel good about where we’re at.”

Things won’t be easy to start, though, for Dallas, which will again host Nashville on Sunday.

The Dallas Stars, however, are not without talent despite those absences. Jamie Benn (39 points last season), Alexander Radulov (34 points), defenseman John Klingberg (32 points) and Joe Pavelski (31 points) are all expected to contribute out of the gate. Anton Khudobin (2.22 goals-against average in 2019-20), who has won 16 games in each of the past three seasons, is expected to start in net Friday.

Dallas won its two early games with Nashville last season but then was shut out in the final two contests in March.

Nashville, who will take to the road for the first time on Friday, opened with back-to-back home victories over Columbus then fell 4-2 to Carolina on Monday. The Predators allowed three third-period goals against the Hurricanes, after yielding three total in their first two contests. Nashville was slated to face Carolina again Wednesday, but that game was postponed due to COVID-19 issues within the Hurricanes’ camp.

The unexpected down time offered the Predators a chance to perhaps regroup and fine-tune some things following their first defeat.

“We had some defensive breakdowns a little bit (Monday), and it cost us,” Viktor Arvidsson, who has a goal with two assists on the young season said. “We’ve got to clean those things up. … You lose sometimes in this league, too, when you play well.”

Juuse Saros stopped 71-of-74 shots in helping Nashville win its first two games, while Pekka Rinne stopped 20-of-23 in the loss at Carolina. Saros has been stellar against Dallas in his career, going 6-0-1 with a 1.97 goals-against average and two straight shutouts as a starter. Rinne, meanwhile, has a 3.32 GAA while losing four of his last five starts against the Stars.

For the Stars, Khudobin has a 1.86 GAA while going 3-2-1 in his last six starts against Nashville. Benn, meanwhile, has just one assist without a goal in his last eight games against the Predators.

Nashville’s Filip Forsberg has a goal in each of the first three contests, but just two in his last 11 facing Dallas.