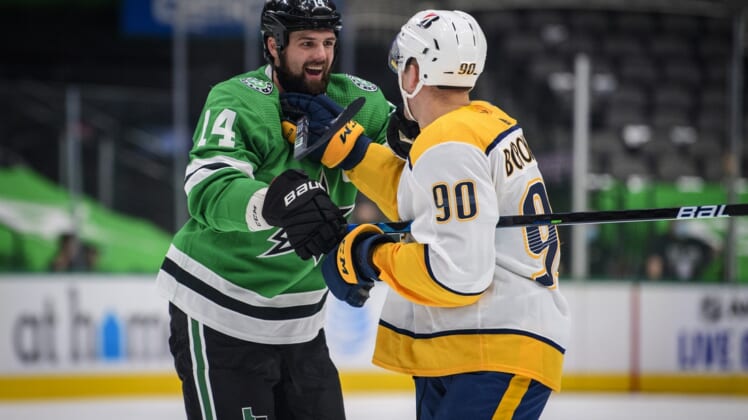 Joe Pavelski and Alexander Radulov each had two goals and combined for seven points, and Anton Khudobin stopped all 34 shots he faced as the Dallas Stars used a five-goal second period to open their season with a 7-0 rout of the visiting Nashville Predators on Friday night.

John Klingberg had three assists, Joel Kiviranta collected a goal and an assist, and Denis Gurianov and Esa Lindell also scored for the Stars, whose four previously scheduled games were postponed due to COVID-19 issues. Dallas matched a franchise record with five power-play goals, on eight chances.

Khudobin was strong while recording his ninth career shutout and 100th victory as the Stars shined despite playing without injured leader Tyler Seguin (hip).

Nashville, which won two of its previous three games, went 0-for-5 on the power play. Juuse Saros, who stopped 71 of 74 shots while winning his first two starts, managed 15 saves on 20 shots before being pulled after two periods. Predators veteran Pekka Rinne stopped six of the eight shots he faced in relief.

Understandably, the Stars were slow-footed during the scoreless first period, and they did not record their first shot on goal until 7 1/2 minutes had elapsed. Dallas, though, found its form early in the second.

The reigning Western Conference champions opened the scoring 2:45 into the middle period during a five-on-three advantage when Pavelski one-timed home a cross-slot pass from Radulov. Less than 1 1/2 minutes later and with a man advantage, Radulov deflected in a Pavelski drive past Saros, who recorded a shutout in each of his two starts against the Stars in 2020.

On another power-play opportunity, Klingberg’s drive through traffic was initially stopped by Saros, but the rebound hit Gurianov’s stick and went in with 9:42 left in the middle period.

Radulov’s second goal came off a flip pass from Kiviranta, and he back-handed the puck out of the air and past Saros with 5:20 left in the second frame.

Dallas completed the scoring bonanza with a short-handed goal from a streaking Lindell with 3:19 to go in the second.

Pavelski positioned himself in front of the net to score another power-play goal 4:35 into the third. Kiviranta closed out the scoring with a power-play blast at 14:52.

A dark moment on the night for the Stars came when captain Jamie Benn exited with a lower-body injury.