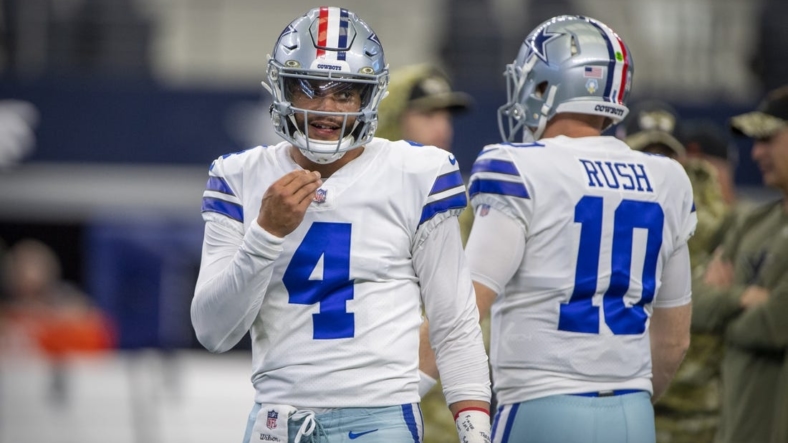 Dallas Cowboys quarterback Dak Prescott could return on the shorter end of the recovery timeline following surgery to repair his broken right thumb.

NFL Network reported Prescott is targeting a window closer to four to six weeks rather than the six to eight weeks initially reported.

Citing sources, NFL Network reported “the timeline will depend on how the bone heals and when Dak resumes throwing. But the surgery was clean, doctors are optimistic and Prescott is a fast healer.”

Cowboys owner Jerry Jones told 105.3 FM in Dallas that Prescott would not be placed on injured reserve, which would require a four-game absence. Jones said he believes Prescott can play in one of the next four games.

“Dak has a real chance to be back out there throwing the ball pretty quick,” Jones said Tuesday.

Prescott left the Week 1 loss to the Tampa Bay Buccaneers and was replaced by Cooper Rush. Rush is slated to start Sunday when the Cincinnati Bengals visit the Cowboys.

Head coach Mike McCarthy said the Cowboys would be making roster moves Tuesday, noting he was carrying a list of all available quarterbacks in his pocket during the media session.

Running back Tony Pollard said the Cowboys don’t plan to change their approach despite the QB switch.

“He can make all the throws,” Pollard said of Rush. “He makes the right reads at the right times. He’s a guy we definitely believe in.”

Prescott exited in the fourth quarter after he hit the hand of Buccaneers linebacker Shaq Barrett while throwing a pass. Prescott said afterward he thought he just jammed it until X-rays revealed a fracture.

“I thought I jammed it,” Prescott said. “I’ve hit my hand on helmets or bodies a lot in my career and never really had anything, maybe a jammed finger. I thought that’s what it was. The next play, I realized I couldn’t grip the ball. I let the sideline know … I came in and got X-rays and things are different.”

Prior to exiting, Prescott completed 14 of 29 passes for 134 yards and threw one interception. Rush took over under center, throwing for 64 yards on 7-for-13 passing as Dallas lost 19-3.

Will Grier, the team’s No. 3 quarterback, has been on the practice squad since final roster cuts were made to set the 53-man regular-season roster.