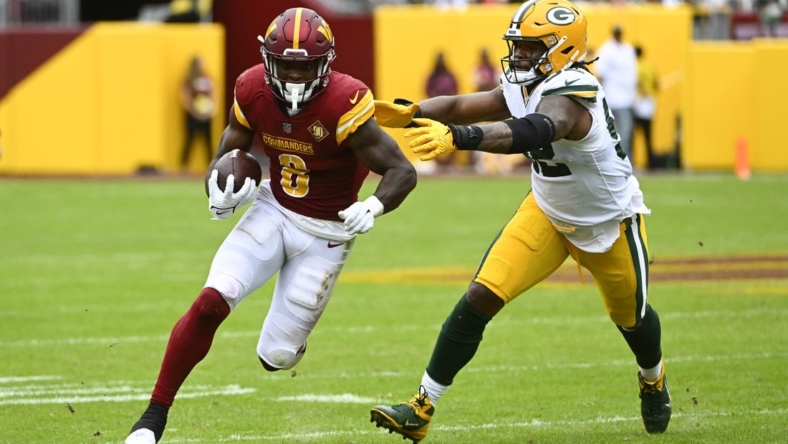 Heinicke, playing for the first time this year after an injury to starter Carson Wentz, threw an early pick six as the Commanders (3-4) fell behind 14-3. After that, Washington scored 20 unanswered points on its way to its second straight win.

The Commanders defense limited the Packers (3-4) to 232 yards and 15 first downs. Green Bay quarterback Aaron Rodgers completed 22 of 34 passes for 179 yards and two touchdowns, both to Aaron Jones, who finished with nine receptions for 53 yards.

The Packers, who were without injured All-Pro offensive tackle David Bakhtiari, got 38 rushing yards on 12 attempts and failed to convert on all seven of their attempts on third or fourth down.

After a 2-for-9 start, Heinicke finished 20-of-33 for 201 yards. He threw touchdown passes of nine yards to Antonio Gibson in the first half and 37 yards to Terry McLaurin on the opening possession of the second half to give the Commanders a lead it wouldn’t relinquish, 17-14.

McLaurin had five catches for 73 yards, including a 12-yard reception on a third-and-9 play with 2:12 left, which helped Washington sew it up.

Joey Slye made three field goals for Washington. His 19-yarder with 6:40 in regulation put Washington up 23-14.

Green Bay answered with a 75-yard touchdown drive, fueled by three Washington penalties. Rodgers capped it with a 21-yard touchdown pass to Jones with 3:22 left.

The Packers regained possession at their own 18 with 23 seconds left. Rodgers threw a strike to Sammy Watkins for 28 yards, but Green Bay’s final desperation play ended with Rodgers throwing an incompletion.

In the first quarter, Green Bay took the lead after pinning Washington deep in its own territory and taking possession at the Commanders 42-yard-line. Seven plays later, Rodgers threw a quick screen to Jones who crashed into the end zone, using second effort on a 4-yard touchdown reception.

Meanwhile, Heinicke was off to a rough start, with the Packers dropping two potential interceptions.

Heinicke’s luck ran out early in the second quarter when he threw into tight coverage. Linebacker De’Vondre Campbell snatched the ball from J.D. McKissic, and took it down the sideline 63 yards for a touchdown that put Green Bay up 14-3.

Heinicke bounced back on the ensuing possession, directing an 83-yard drive that he capped with his 9-yard touchdown pass to the back of the end zone to Gibson on a third-and-8 play.