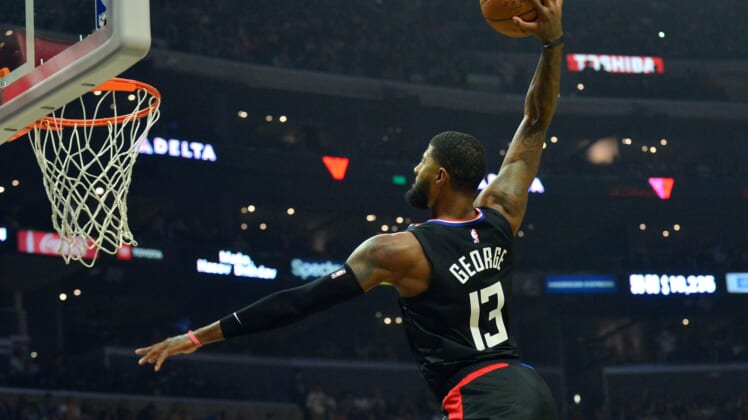 Star forward Paul George is in the midst of his first season with his native Los Angeles Clippers after being acquired from the Oklahoma City Thunder last summer. Whether George remains with the Clippers long-term remains to be seen.

The All-Star has an opportunity to opt out of his contract following next season. He’s also apparently used time in quarantine while the NBA season is suspended thinking of his future.

According to this note from the Los Angeles Times, George has his Southern California estate on the market for a cool $9.5 million.

Considered one of the most posh towns in the entire Western United States, Hidden Hills has a population of less than 2,000. It’s located next to the city of Calabasas. The property itself is absolutely ridiculous.

Even at a time of tremendous economic angst, this is going to be a super hot property for someone within the elite circles of the celebrity world.

Though, it does raise a question or two about George’s future with the Los Angeles Clippers

The six-time All-Star is currently playing under a four-year, $136.9 million contract he signed with the Thunder back in July of 2018. He’s set to earn $35.45 million next season and can opt out of his contract in order to become a free agent following the 2020-21 campaign.

Financially, George will likely be able to learn a lot more money if he’s able to hit free agency next summer. Whether that means he plans on making his tenure with the Clippers relatively short remains to be seen.

Remember, the former Indiana Pacers first-round pick orchestrated the trade that sent him from Oklahoma City to the Clippers last summer. A native of Palmdale just outside of Los Angeles, George wanted to return home to team up with Kawhi Leonard.

It stands to reason that George would want to remain with the Clippers for the long haul. Though, he had also been linked to the Lakers prior to signing the above-mentioned extension with Oklahoma City back in 2018.

It’s hard to read too much into George putting his mansion on the market. But it is rather interesting timing. That’s for sure.