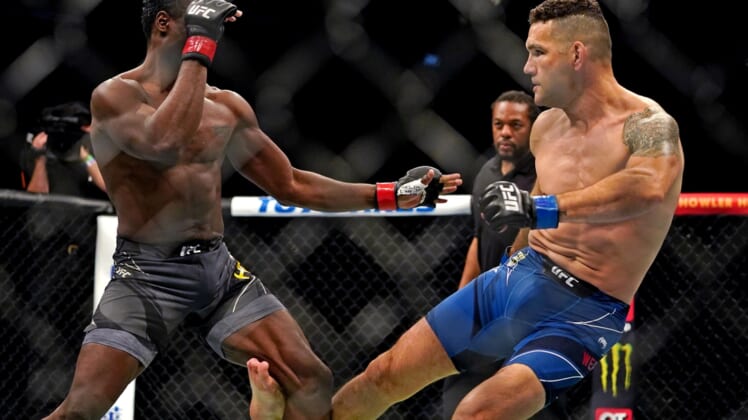 Weidman is facing a recovery period of up to a year after badly breaking his right leg just 17 seconds into his bout against Uriah Hall. He collapsed to the canvas as his lower leg snapped in a gruesome manner.

Medical personnel treated Weidman before he was taken out of the Octagon on a stretcher, and he underwent surgery the following day.

Weidman, who turns 37 in June, said in an Instagram video that both the tibia and fibula were broken. He said surgeons inserted a titanium rod in the leg.

The Florida Department of Business and Professional Regulations handed down the list of medical suspensions, which includes five other fighters who are shelved for a potential 180 days.

Valentina Shevchenko, the women’s flyweight champion, is one of those fighters. The reason for the medical suspensions are not listed, due to privacy laws.

Shevchenko successfully defended her title with a TKO finish of Jessica Andrade at UFC 261.

Weidman (15-6) has lost six of his last eight bouts after opening his career with 13 consecutive victories.