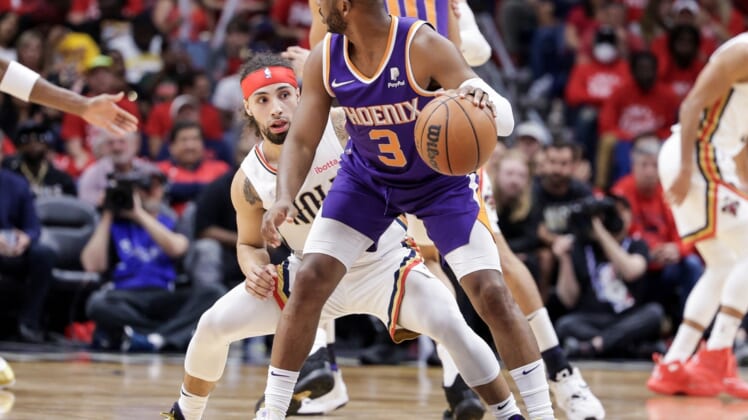 Chris Paul scored 33 points in a perfect shooting performance as the visiting Phoenix Suns won their first-round Western Conference playoff series with a 115-109 victory over the New Orleans Pelicans in Game 6 on Thursday night.

Paul made all 14 of his field-goal attempts and all four of his free throws, and Devin Booker returned from a hamstring injury and scored five of his 13 points in the final two minutes.

Deandre Ayton scored 22 points, Mikal Bridges had 18 and Cameron Johnson added 13 for the top-seeded Suns, who will face the winner of the Dallas-Utah series.

Paul had two baskets and an assist to help Phoenix take a 99-98 lead midway through the fourth quarter.

Bridges followed with a steal and a layup and Paul added two free throws for a 110-104 lead with 1:01 left.

New Orleans twice got within three points, but Paul made a basket and Booker made two free throws.

The score was tied at 28 after the first quarter and Ingram scored seven points during an 11-0 run that gave New Orleans its largest lead of the half at 52-40.

Bridges’ layup ended the run and Phoenix cut the lead to eight before Nance’s tip-in gave the Pelicans a 58-48 halftime lead.

The Suns scored the first five points of the third quarter to cut the Pelicans’ lead in half, but New Orleans quickly rebuilt it to 10.

Jones scored nine points late in the quarter to help New Orleans take an 85-82 lead at the end of the period.