Chiefs’ Patrick Mahomes has been a mistake-filled mess during camp 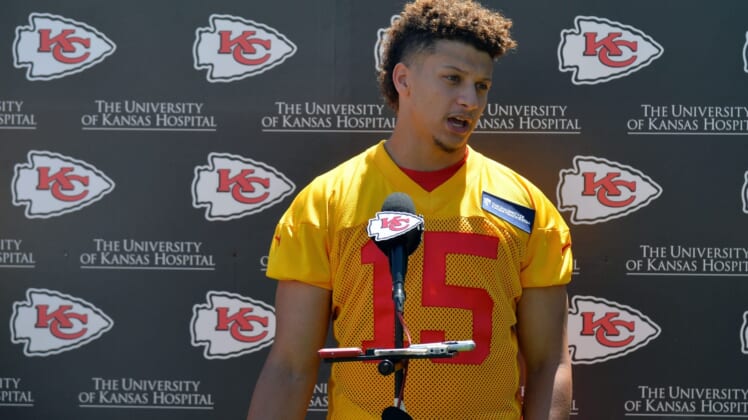 In his first training camp as the starting quarterback for the Kansas City Chiefs, things are not going especially well for Patrick Mahomes.

KPass drops into coverage and pick off Mahomes. The big guy got one! #ChiefsCamp pic.twitter.com/9oNIoLzLmw

Adam Teicher of ESPN noted that Mahomes threw three interceptions in camp on Wednesday. That bumped his total up to seven in just six practices. Offensive coordinator Eric Bieniemy acknowledged his quarterback’s struggles.

“He had a few hiccups today,” Bieniemy said, per Teicher. “But that’s a part of the process. When you’re young you need those hiccups because they become valuable lessons. … Would we like for him to be perfect? Yes. We’d like for him to have the highest quarterback rating ever. … He just needs to be poised under pressure.”

Bieniemy and Mahomes discuss the three interceptions today and bouncing back. @KCTV5 pic.twitter.com/bsO1AaGekd

At his best, Mahomes has the potential to be an upgrade over Alex Smith. For a team that’s struggled offensively in the playoffs, that’s quite significant.

That said, these aren’t the kind of mistakes that can be made. They can be slightly more tolerated on a team expecting to rebuild. But the Chiefs are looking to take the next step and really compete for Super Bowls. This isn’t exactly what anyone in the Kansas City organization wants to see.

Mahomes would do well to clean these up in a hurry.