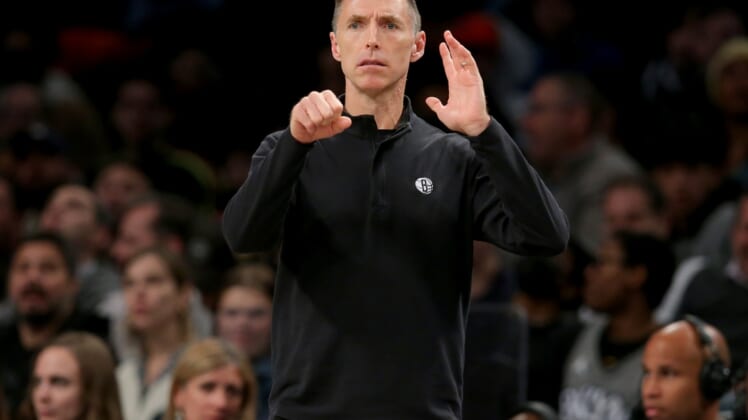 Even if there were aspects of their 41st win that the Brooklyn Nets did not find aesthetically pleasing, they were glad to get it and move on.

Another crucial game looms Wednesday night when the Nets visit Madison Square Garden to conclude the season series with the New York Knicks.

The Nets (41-38) are seeking their seventh straight win over the Knicks after earning three close victories this season, including a 111-106 triumph on Feb. 16 at Madison Square Garden when Kevin Durant and Kyrie Irving did not play and Brooklyn stormed back from a 28-point deficit.

Brooklyn is 9-7 since Durant returned from a sprained medial collateral ligament in his right knee. The Nets are 12-22 in their past 34 games — a stretch that included an 11-game skid while Durant was out — and it is among the reasons Wednesday is not a playoff rehearsal but another crucial game for one of four Eastern Conference play-in spots.

The Nets recorded a 118-105 victory over the visiting Houston Rockets on Tuesday despite experiencing some shaky moments while allowing a 21-point lead to be whittled to six. Their most encouraging sign was getting 42 points from Irving in his best game since being allowed to be a full-time player again.

If certain aspects of the win were not flawless, the results on the scoreboard were. While the Nets led most of the way on Tuesday, the Cleveland Cavaliers, Charlotte Hornets and Atlanta Hawks all took losses.

“These next games are huge,” Brooklyn forward Bruce Brown said. “We want to get to the 7 spot.”

The Nets may still be short-handed. Goran Dragic (health and safety protocol) is out for Wednesday while Seth Curry (sore left ankle) and James Johnson (non-COVID illness) may suit up.

The Knicks (35-44) are playing their third game since being officially eliminated from playoff contention on Thursday. New York’s season was done in by a 3-17 slide from Jan. 17 to March 4, but the Knicks are 10-6 in their past 16 contests and are viewing the chance at spoiling the Nets’ positioning as their playoff game.

The Knicks gave themselves plenty to be fired up about Sunday when Barrett scored 27 in a 118-88 rout of the host Orlando Magic. Toppin scored a career-high 20 points for the second straight game.

Toppin is in the starting lineup because Julius Randle is likely done for the season due to a sore right quad. Like Barrett, Toppin is looking forward to the game, especially because of what unfolded in the first three meetings.

“We lost so many close games against them,” Toppin said. “We’ve just got to get a win against them. We’ve got to come out with a lot of energy.”