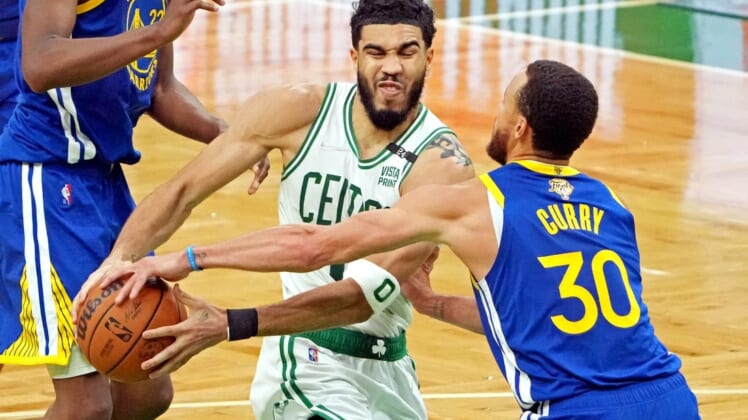 Boston Celtics All-Star forward Jayson Tatum played with a small break in his left wrist during the final months of the 2021-22 regular season, he said in an interview.

The Celtics star said he injured his wrist Feb. 13 in a game against the Atlanta Hawks but didn’t have it medically evaluated until the regular season was over and before the playoffs started — about two months later.

He said it had healed before the Celtics met Golden State in the NBA Finals, which the Warriors won in six games.

“Come to find out, this was eight weeks later, it showed that I had a non-displaced fracture in my wrist,” Tatum said in the Bleacher Report interview, posted online Sunday. “And it was small but it was still a non-displaced chip. So I chipped a bone but it didn’t leave the surface. But it had shown that the bone had grew over it so it healed, but I was still in pain because I kept getting hit or falling on it. So I guess I played with somewhat of a fracture for two months.”

Tatum, 24, said the wrist still was bothersome after Game 3 of the Eastern Conference semifinals when he was fouled by Giannis Antetokounmpo of the Milwaukee Bucks. He needed a cortisone shot to continue in the series, he said.