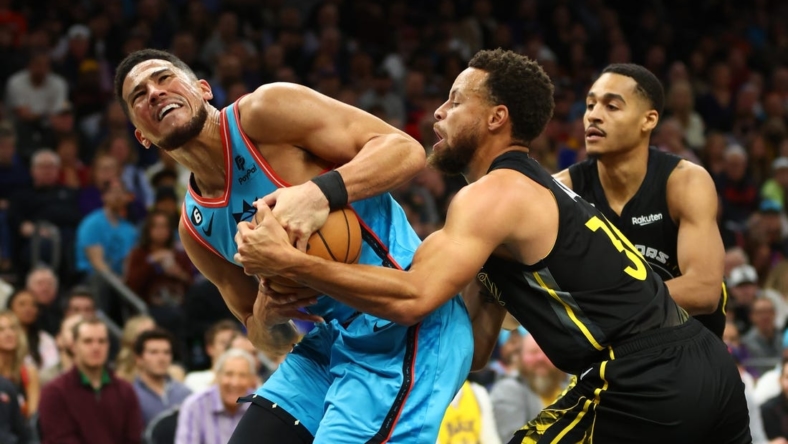 Cameron Payne made six 3-pointers while scoring a career-best 29 points and Devin Booker added 27 points, nine assists and three blocked shots to lead the Phoenix Suns to a solid 130-119 victory over the road-challenged Golden State Warriors on Tuesday night.

Mikal Bridges sank five 3-pointers and had 23 points, nine rebounds and nine assists for the Suns, who improved to 7-1 at home. Deandre Ayton scored 14 points and Torrey Craig added 13 points and 10 rebounds for Phoenix.

Stephen Curry scored a season-best 50 points on 17-of-28 shooting, including 7 of 11 from 3-point range, for the Warriors. It is the 11th time Curry has scored 50 or more points in a regular-season game.

The setback drops Golden State to 0-8 on the road, the club’s worst such start since the 1989-90 Warriors lost their first nine away games.

Chris Paul (heel) sat out his fourth straight game for the Suns.

Payne has started in place of Paul in all four games and topped 20 in three of them. He also contributed seven assists.

Golden State connected on 45.7 percent of its shots and was 18 of 42 (42.9 percent) from behind the arc. Curry, who also had nine rebounds and six assists, has topped 40 points in three of the past five games.

The Suns led by seven at the half before Payne and Craig opened the third quarter with 3-pointers to make it 78-65.

The Suns led 103-89 entering the final stanza but two 3-pointers by Donte DiVincenzo helped the Warriors creep within eight with 10:32 left.

Phoenix responded with nine straight points on baskets by Jock Landale and Ayton, two free throws by Payne and a 3-pointer by Damion Lee to take a 114-97 lead with 7:03 left.

Payne scored 18 in the first half and Booker added 16 as Phoenix led 72-65 at the break. Curry had 31 in the half for Golden State.