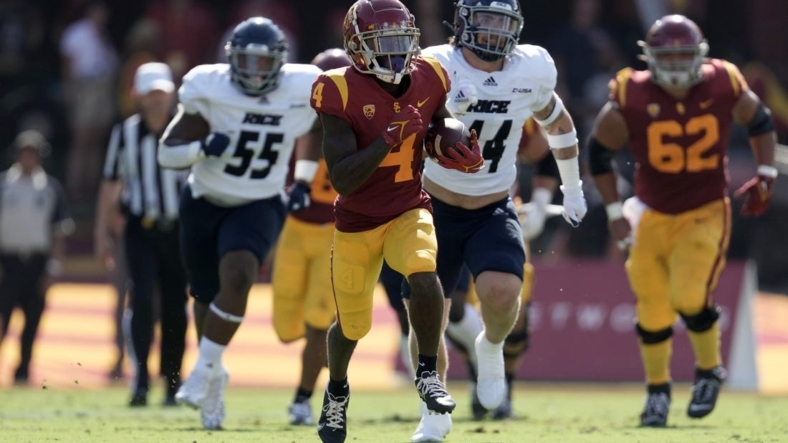 Caleb Williams threw a pair of touchdown passes to Jordan Addison, Austin Jones rushed for another pair of scores and No. 14 USC rolled past Rice 66-14 on Saturday at Los Angeles in the season-opening game for both teams.

The highly anticipated debut of the transfer duo did not disappoint from the start. Williams — who followed Trojans coach Lincoln Riley, also making his debut, from Oklahoma — completed 19 of 22 pass attempts for 249 yards.

Caleb Williams also paced USC in rushing with 68 yards on six carries. Jones’ touchdown carries of four and 28 yards highlighted a 48-yard day, while Raleek Brown added 36 yards rushing and a score from 14 yards out.

USC scored on its opening drive when Williams found Addison for a 5-yard touchdown.

Rice answered USC’s initial score with one of its own, consuming more than eight minutes of first-quarter clock before Ari Broussard’s goal-line touchdown carry capped the 16-play, 74-yard drive.

The 7-7 tie was as close as the Owls would get, as USC scored three touchdowns less than seven minutes into the second quarter.

Broussard reached the end zone a second time just before halftime, punching it in from two yards out to cap a 10-play, 75-yard Rice drive that ate 6:30 of game clock.

Any hope the Owls had of mounting a comeback from their 31-14 halftime deficit evaporated when USC’s Shane Lee and Ralen Goforth returned interceptions of Rice quarterback TJ McMahon 40 and 31 yards, respectively, for touchdowns less than a minute apart.

McMahon was picked off three times in total and reserve quarterback Wiley Green threw a fourth interception. Xamarion Gordon and Calen Bullock had the Trojans’ other two interceptions.