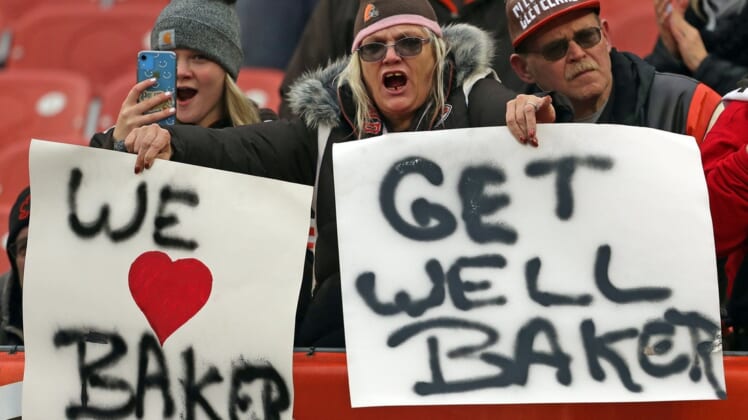 A Cleveland Browns fan shows support for quarterback Baker Mayfield during the first half against the Cincinnati Bengals, Sunday, Jan. 9, 2022, in Cleveland.Browns 19 1

Browns general manager Andrew Berry appears to have invested in a front-row seat for the Baker Mayfield redemption tour in 2022.

Berry said Tuesday that Mayfield, who needs left shoulder surgery to repair a torn labrum, is Cleveland’s expected starter next season despite a downturn in his performance and production in 2021.

“We know his work ethic. We know his drive,” Berry said Tuesday. “We see him as a talented passer in this league. We expect him to bounce back next year.”

Berry and the Browns picked up the fifth-year option on Mayfield’s contract prior to the 2021 season. Mayfield said he wasn’t concerned about his long-term contract status. If left unchanged, the existing deal leaves him relatively unprotected in the event of injury on the heels of a season in which he was a fixture on the injury report.

Mayfield did not play in the regular-season finale in Week 18 with the Browns eliminated from playoff contention. He said injuries had limited him since the second week of the regular season but didn’t want to use them as an excuse. He was sacked nine times in his final game of the season, a loss to the Pittsburgh Steelers on Jan. 4 that left him with a 6-8 record as a starter in 2021.

“I don’t want to speak for him. I can only speak for myself and what I saw,” Keenum said. “I did have a front-row seat to one of the toughest, gutsiest performances of a quarterback playing through a season that I’ve ever seen. Battling a lot of things.”

The guaranteed option pays him $18.86 million in 2022. More than half of the NFL’s 32 teams could be in the market for a starting quarterback in the offseason, and his option has no trade limitations should the Browns be bowled over by an offer.

“It’s not gonna always be pretty or smooth, but I’m a fighter,” Mayfield, 26, said. “If anybody ever questions how much I want it, just turn on this tape. It wasn’t pretty, but I kept going, kept swinging; that’s who I am, and that’s what I will continue to be.”

In addition to the torn labrum, Mayfield was on the injury report with left foot soreness and a right knee contusion. He also has had to wear a harness on the left shoulder to prevent it from popping out of place.