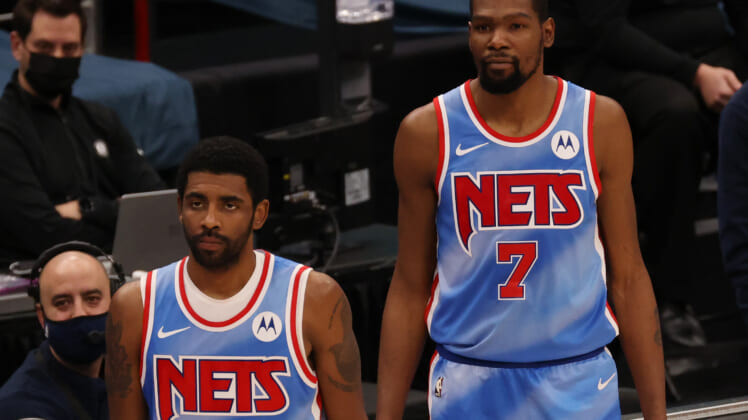 If you are a Brooklyn Nets fan hoping for a speedy resolution to the planned trades of Kevin Durant and Kyrie Irving, you may want to get comfortable because it might take a while.

The NBA world was turned on its head last week when ESPN reported that Durant had officially asked the Nets for a trade. While there were rumors of that eventuality this offseason, the news still came as the most stunning moment thus far in the 2022 NBA offseason.

Yet not only is the former league MVP and 12-time All-Star up for grabs but so is his talented sidekick Kyrie Irving. Both trades will be massive moves for the Nets, however, they will land the far better haul in a deal for Durant. Since the 33-year-old is signed for four more seasons.

Related: Minnesota Timberwolves linked to Kyrie Irving: How a trade could work

While his agent Rich Kleiman claimed when the news broke that Brooklyn general manager Sean Marks is expected to help his client land in a preferred destination, Durant has little leverage, and Brooklyn must seek out the best offer available. Furthermore, an Irving deal may have to wait until the Durant situation is handled first, meaning both may not happen soon.

What the Nets get in a trade for Durant will affect the franchise for years to come. Meaning they want and need an unbelievable haul. With much of the NBA interested in trading for the forward, Brooklyn has no need to rush and will wait until they get that goldilocks offer from a rival team. That process could take a while. How long? Maybe all the way into training camp for the 2022-2023 season.

On Monday, New York Post columnist Brian Lewis revealed that the team is willing to wait until September and October to see if things between the players and team could be worked out, or until they finally get the massive trade return they are hoping for.

Durant is in the first year of a four-year, $194 million contract extension he signed before the 2021-2022 season. Irving has one year and $36 million left on the final year of the four-year contract he signed with the Nets in 2019.

Training camp for this past season began on the final days of September.