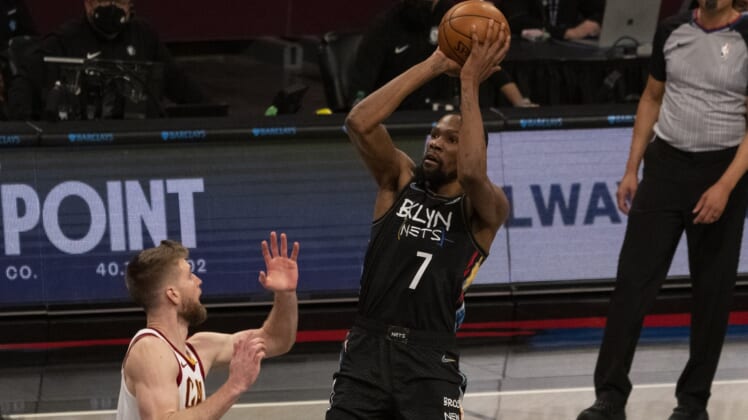 Kevin Durant totaled 23 points, a season-high-tying 13 assists and eight rebounds in three quarters as the Brooklyn Nets secured the second seed in the Eastern Conference with a wire-to-wire 123-109 victory over the Cleveland Cavaliers Sunday night in New York.

The Nets (48-24) ended the season on a five-game winning streak and edged out the Milwaukee Bucks for the second seed. A loss by Brooklyn and a Milwaukee win over the Chicago Bulls would have pushed the Nets into the third seed due to losing the head-to-head tiebreaker with the Bucks.

A day after shooting 4 of 17 from the field against the Chicago Bulls, Durant made his first eight shots and shot 8 of 10 overall. He finished one shy of his career best for assists set on Jan. 23, 2018 for the Golden State Warriors against the New York Knicks.

Mike James chipped in 14 points, Jeff Green contributed 13 and Bruce Brown and Landry Shamet finished with 12 points as the Nets shot 56.6 percent and handed out 35 assists on a night they rested James Harden.

Dean Wade and rookie Issac Okoro scored 18 points apiece for the Cavaliers (22-50), who ended the season with 13 losses in 14 games. Damyean Dotson added 17 and Collin Sexton finished with 16 before getting ejected with 6:11 remaining in the third quarter for a flagrant-two foul when he elbowed Durant above the face.

The Nets raced out to a 31-14 lead on a 3-pointer by Green with 2:57 remaining and held a 34-24 lead after the opening 12 minutes. After Cleveland cut the deficit to six points with under three minutes remaining, the Nets converted four dunks in the final 2:22 for a 67-56 lead by halftime.

After ending the first half by taking a feed off the backboard and throwing down a dunk on Brooklyn’s final possession, Durant scored 13 points in the third the Nets ended the quarter on a 17-6 run to take a 99-76 lead.