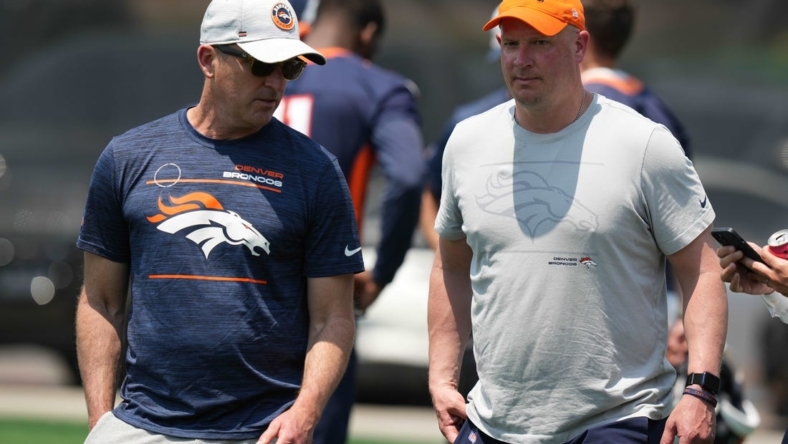 Paton made the comments in London, where the Broncos are prepping to play Jacksonville at Wembley Stadium on Sunday. His remarks come in the aftermath of an ESPN report Wednesday that there is some chatter in league circles that Hackett’s job could be on the line Sunday.

Acknowledging that Denver’s 2-5 start is “not good enough,” Paton nevertheless threw his full weight behind the Broncos’ embattled first-year coach.

“I believe in Nathaniel. I support Nathaniel 100 percent,” Paton told reporters. “He’s been in this for seven games as a head coach. The scrutiny he’s faced is unprecedented. We’ve had four prime-time games, so he’s kind of had to learn in front of the entire world. I really like how he’s kept the team together. They’re connected.

“He’s kept our building together and I appreciate how he’s fought through that.”

The Broncos are mired in a four-game losing streak and sport the league’s worst scoring offense — 14.3 points per game.

“Obviously, the results aren’t there,” Paton said from the Harrow School in London. “Obviously, (it’s) not good enough. … I do believe in this football team, I do believe in the people in our building, the coaching staff, that we can turn it around. It’s only seven games. Obviously we’ve been in every game, and that’s not what it’s all about. It’s about winning games, and we need to learn how to win football games. We haven’t done that.”

But with a new coach, new quarterback, new staff and schemes, Paton said he knew it would take time.

“A lot of newness,” Paton said. “It doesn’t come all together. I knew it wasn’t going to be a well-oiled machine. I thought it would take time. … No excuses. We need to play better, obviously. The offense isn’t good enough to win games. Defense has kept us in it, but the offense has to play better.”

Paton also threw his support behind quarterback Russell Wilson, who has struggled and is currently nursing a hamstring injury. Wilson missed last week’s game with it.

He also defended the contract given to Wilson, who’s 33 years old. Paton said he wanted to “get ahead of the contract cycle.”