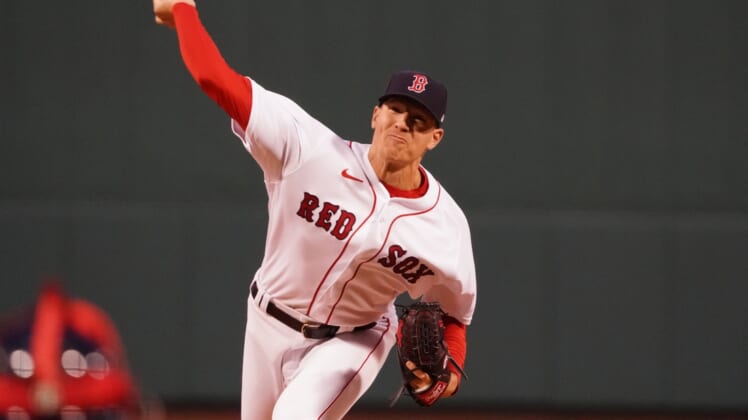 J.D. Martinez hit a three-run home run, Xander Bogaerts had four hits and the Boston Red Sox emerged from an early offensive slump to beat the visiting Tampa Bay Rays 11-2 Monday night for their first win of the season.

Franchy Cordero and Alex Verdugo each had two RBIs for the Red Sox, who were held to five runs total in losing their first three games. Nick Pivetta (1-0) allowed just two hits in five shutout innings, walking four and striking out four.

The Rays dropped their second straight after two victories to begin the year. Tampa Bay’s eight-game winning streak at Fenway Park came to an end.

The Red Sox grabbed their first lead of the season when Cordero’s double off the top of the scoreboard in left field drove home Christian Vazquez in the second inning against Michael Wacha in his Rays debut. Boston had a prime chance to break the game open in the fourth had it not been for an early candidate for play of the year.

With men on second and third and no outs, Hunter Renfroe hit a liner to right that appeared destined for the gap in center field. But Randy Arozarena, moved to right an inning prior after Kevin Kiermaier exited with left quad tightness, made an incredible leaping dive to hold the Red Sox to a sacrifice fly on the play.

Boston added another run on a Cordero groundout in the inning and made it 5-0 in the fifth on a Bogaerts RBI double that saw Bogaerts then come home on a throwing error by Tampa Bay catcher Mike Zunino.

Pivetta’s biggest jam came in the fifth, when he allowed a leadoff double and had men on second and third with two outs. He got Austin Meadows to fly out to complete his night.

After the Red Sox scored twice in the sixth, the Rays got on the scoreboard in the eighth on back-to-back bases-loaded walks. Martinez’s homer highlighted a four-run Boston eighth.