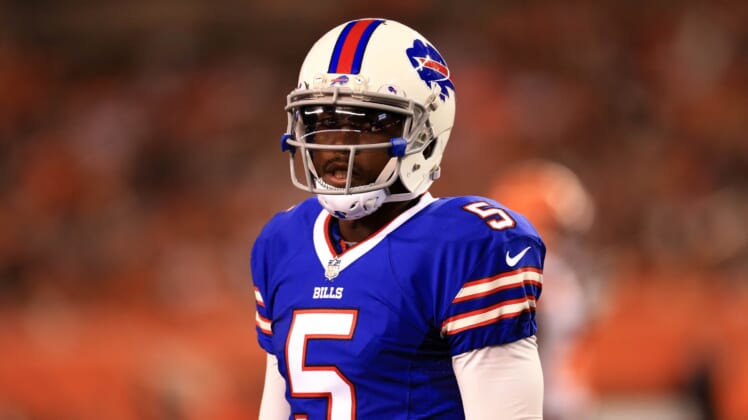 After signing a five-year, $90 million contract in the offseason that sent shockwaves through the NFL, it was expected that Tyrod Taylor would finally be the quarterback to lead a talented Buffalo Bills team back to the Super Bowl for the first time since the Jim Kelly era.

Fast forward to week 14, and while the Bills hold the NFL’s top-ranked rushing offense, their 181.5 passing yards per game is dead last in the league.

Much of the blame has been laid at the feet of the quarterback, and rightfully so, as Taylor’s uneven play has given many a Bills fan cause for concern.

During a press conference Thursday afternoon, Tyrod took some heat while being questioned, and had the following to say before abruptly walking out of the press conference.

“I’ve taken everything that y’all have stood up here and asked me right on the chest,” he said, via the Buffalo News. “It doesn’t affect me emotionally or physically. I take it every week, so whatever y’all want to blame, I’ll take that. Like I said, my job is to get the team into a position where we can win on Sundays. Can I be better, yes. But it doesn’t just take me, it’s a collective effort out there on the field each and every Sunday.”

The organization has gone silent in regards to their quarterback, and this could lead to the team not picking up Taylor’s $27 million team option for the 2017 season.

Taylor followed up by saying that, regardless of the circumstances, he would not stop battling until the Bills were eliminated from playoff contention.

“In this league, you get judged on wins and losses, and we still have a chance to get to where we set our goal, (which) was to get to the playoffs at the beginning of the year,” he said. “We still have a realistic chance of getting there, so whatever it takes to get there, that’s what I’m on board for.”

If the Bills fail to make the playoffs, expect the heat on Taylor to increase, and for the organization to think long and hard about pickup up his option for next season.