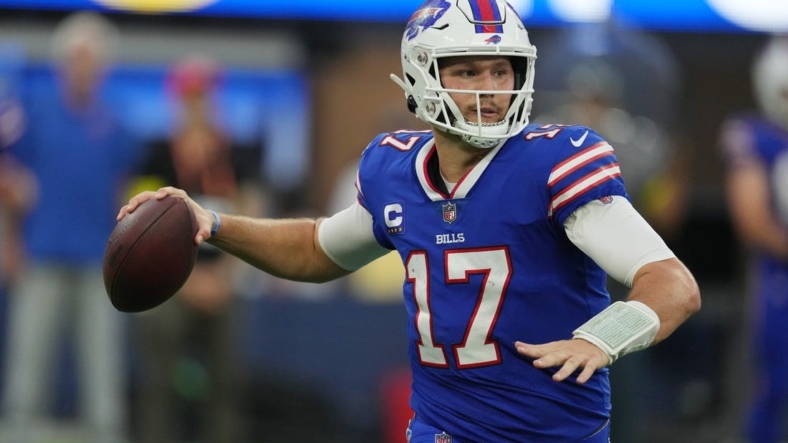 Josh Allen passed for 297 yards and three touchdowns and rushed for one score to lead the Buffalo Bills to a convincing 31-10 victory over the Los Angeles Rams on Thursday night in the NFL season opener in Inglewood, Calif.

Matthew Stafford was 29-of-41 passing for 240 yards and one touchdown for the Rams. Stafford had passes intercepted by Dane Jackson, Jordan Poyer and Boogie Basham and guided Los Angeles to just 243 yards.

Cooper Kupp caught 13 passes for 128 yards and one touchdown for the Rams. Aaron Donald registered his 99th career sack while Terrell Lewis and Troy Hill had interceptions.

The Bills totaled 413 yards and won despite committing four of the game’s seven turnovers. Allen completed 26 of 31 passes, with two of the five incompletions intercepted. He also rushed for a game-high 56 yards.

The Bills took a 17-10 lead when Allen tossed a 7-yard touchdown pass to McKenzie with 7:59 left in the third quarter.

On the first play of the final quarter, Allen spotted Davis with 1-on-1 coverage for 47 yards to the Los Angeles 6-yard line. Three plays later, Allen scrambled to score from the 4, reaching the ball over the goal line with 13:27 left.

Four minutes later, the Bills used a long strike to increase their lead to 31-10. Diggs ran a streak down the right sideline, blowing past the Rams’ Jalen Ramsey to haul in a 53-yard scoring reception.

Any Los Angeles comeback bid was short-circuited by Basham’s interception with 6:56 left.

The score was tied at 10 at halftime after Matt Gay of the Rams booted a 57-yard field goal as time expired.

Buffalo navigated 75 yards on nine plays to open the game, with Allen flipping the ball to a wide-open Davis for a 26-yard score.

The Bills increased the lead to 10-0 on Tyler Bass’ 41-yard field goal with 8:48 left in the half. The Rams scored when Stafford hit Kupp on a 4-yard pass with three minutes remaining.