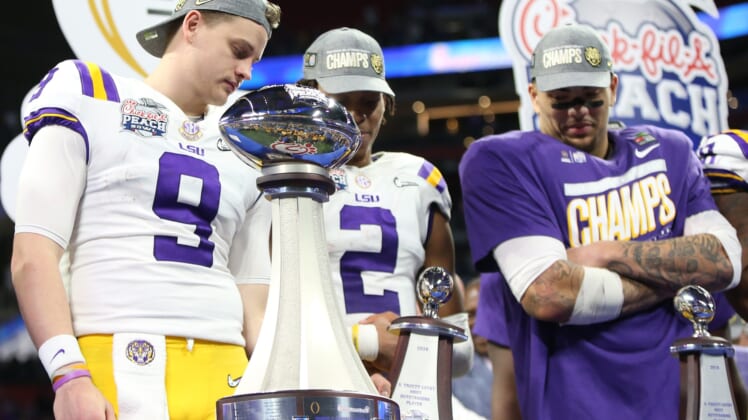 Debates of greatness are one of the most common arguments among sports fanatics. Who is better, Michael Jordan or LeBron James? Is Tom Brady the greatest quarterback or is he a product of an amazing coach in Bill Belichick? The list goes on and on for the most common debates.

Here are the top 10 College Football teams since 2000.

We all just witnessed the greatest football team to ever step foot on a collegiate football field. For the next few decades, the 2019 LSU team will be the golden standard in college football.

The 2001 Miami team had star power. Every part of it seemed to be stacked with household names. It is one of the few teams on this list who had an abundance of successful NFL players.

In order to be one of the greatest teams in college football’s history, you need to beat some really good teams. No other team on this list has beat a team as good as the 2018 Alabama team. This Alabama team was considered one of the greatest college football teams in history going into the National Championship. Not only did Clemson beat it, the Tigers utterly dominated them. They won 44-16, the worst loss in Nick Saban’s Alabama career.

Every great team has an all-time great moment. No team has a greater moment than the 2005 Texas Longhorns. Vince Young scrambling for the game-winning touchdown versus USC will forever be engraved in college football history. When people think college football, one cannot help but to think about Vince Young waltzing into the end zone to win the National Championship.

The 2008 Florida team was full of mysteries. Similar to the 2001 Miami team, it had a lot of talent on paper. The 2008 Florida team had players who started to make their mark in the NFL, but off the field, issues crippled their careers (Aaron Hernandez and Riley Cooper). The Pouncey brothers experienced a tremendous amount of success in the NFL. Cam Newton was a back-up QB. All of them were led by their polarizing quarterback, Tim Tebow.

The 2013 Florida State had one of the most explosive offenses the game of football has ever seen. The team was led by Jameis Winston and Kelvin Benjamin, with Jimbo Fisher calling the plays. The offense carried the Seminoles to a National Championship victory.

The 2004 USC Trojans have probably been the most polarizing team in the past two decades. They had a Heisman winner in running back, Reggie Bush, who got his Heisman taken away. This was not the only award to be taken from them either. The BCS stripped the Trojans of the 2004 championship.

It is impossible to list the best college football teams since 2000 and not include Nick Saban and Alabama. Saban has produced many elite defenses, but none were as suffocating than the 2011 team. This defense was the best defense that has ever been assembled in college football history.

The non-power 5 teams rarely get any love. The Mountain West is arguably the most forgotten conference in all of college football. However, Boise State always makes sure to remind the country of how good the Mountain West is. Boise State has a lot of good teams to choose from, but the 2004 team was the most heroic.

A lot of people will never imagine this team being on any sort of list like this one. The 2012 Texas A&M team did not win any championship, and it did not go undefeated. However, Johnny Manziel and the Aggies gave the nation something it had never seen. They played football like it was a backyard game on a fall afternoon. They played like so many people across the nation play: reckless and joyful.