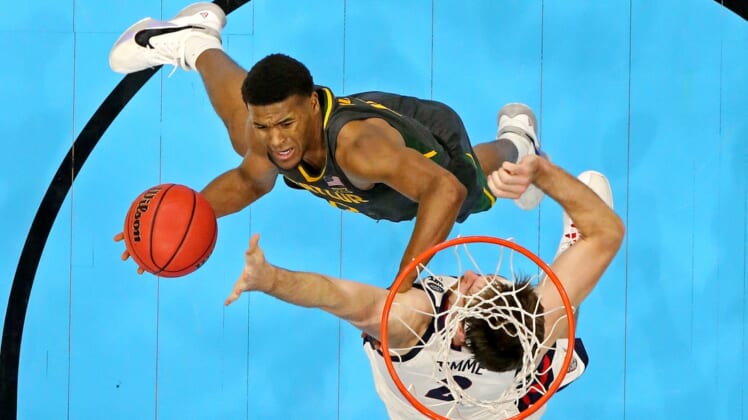 Jared Butler made four 3-pointers and recorded 21 points and seven assists as Baylor turned Gonzaga’s unbeaten season dream into a nightmare with a wire-to-wire, 86-70 victory in the national championship game on Monday night at Indianapolis.

MaCio Teague added 19 points as the Bears (28-2) won their first national title by prevailing in the battle of No. 1 seeds. Davion Mitchell contributed 15 points, six rebounds and five assists, and Adam Flagler scored 13 points for Baylor.

Jalen Suggs scored 22 points for Gonzaga (31-1), which had its 35-game winning streak halted. The Bulldogs were attempting to become the first undefeated national champions since Indiana in 1975-76.

Drew Timme and Corey Kispert added 12 points apiece for Gonzaga, which trailed by as many as 20 points.

The Bulldogs have lost in the title game in two of the past four NCAA Tournaments.

Gonzaga had trimmed its deficit to nine with 14:29 to play before the Bears reasserted control with a 9-2 push.

Mark Vital scored in the interior and Butler added two free throws. Timme scored on the inside for the Bulldogs, but Teague followed with a layup and Flagler drained a 3-pointer to make it 67-51 with 12:55 remaining.

More than two minutes later, Mitchell made two free throws to give Baylor the game-high 20-point lead at 73-53.

The Bulldogs didn’t get closer than 13 the rest of the way.

Baylor made 10 of 23 from 3-point range and shot 44.8 percent overall while beating Gonzaga for the first time in six all-time meetings. The Bears held a dominating 38-22 rebounding advantage and collected 16 on the offensive boards to the Bulldogs’ five.

Vital had 11 rebounds — eight on the offensive end — for Baylor.

The Bulldogs shot 51 percent and were 5 of 17 from behind the arc.

Baylor made its only previous NCAA title-game appearance in 1948, when it lost 58-42 to Kentucky.

Teague scored 14 points and Butler added 10 as the Bears held a 47-37 halftime lead.

Over the first 6 1/2 minutes, Gonzaga looked to be stuck in a celebratory hangover from Suggs’ miraculous game-winning shot against UCLA on Saturday. The Bears scored the first nine points and sped out to a 21-6 lead.

Butler and Teague buried back-to-back 3-pointers — making Baylor 5 of 5 from long range — to increase the advantage to 29-10 just before the midway point of the half.

The Bulldogs finished the half with a 9-2 run as Anton Watson’s layup with 2.5 seconds left cut Baylor’s lead to 10.

Butler made two 3-pointers in the first 61 points of the second half as the Bears took a 53-39 lead.

A short time later, Andrew Nembhard drove for a layup to cut Gonzaga’s deficit to 58-49 — marking the first time the Zags trailed by single digits since it was 13-4.