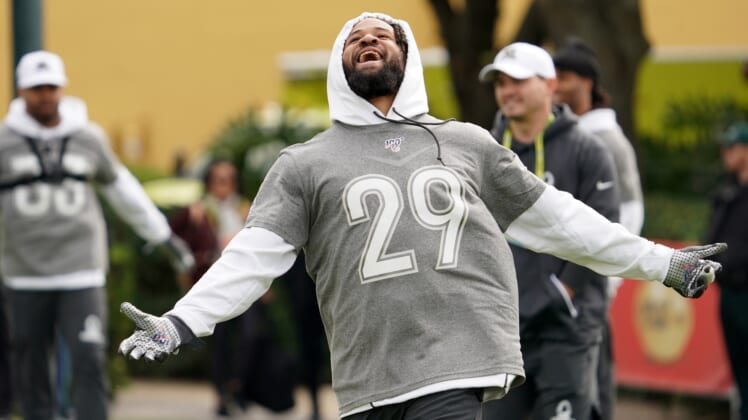 The Baltimore Ravens are preparing to part ways with star safety Earl Thomas, following a turbulent few months that saw him burn bridges with the entire organization.

With Thomas on his way out of Baltimore, the Dallas Cowboys could look to take advantage with the hopes of bringing in the seven-time Pro Bowl selection.

Just a year after signing Thomas to a four-year, $55 million contract, Baltimore is now ready to give up on the 2019 Pro Bowl safety. Despite the huge role he played in this becoming one of the NFL’s best defenses, the Ravens have had enough.

ESPN’s Adam Schefter first reported on Sunday that the Ravens planned to trade or release Thomas. The team explored its trade options but with no team willing to give up a pick, the Ravens terminated his contract for violating the club’s personal conduct policy.

Thomas was reportedly late for several team meetings during the 2019 season, but the real problems started this offseason. In May, he was involved in an off-field situation with his wife that led to the team questioning his future with the organization.

On Friday, the Ravens sent him home after he got into a fight with teammate Chuck Clark. After the incident, several players reportedly made it clear to management that they wanted Thomas gone.

The Ravens would carry a $25 million cap hit over the next two seasons by releasing Thomas outright. However, by citing conduct detrimental to the team, the club hopes to void some of that money. However, Thomas and the NFL Players Association will file a grievance to recoup what he is owed.

Following the release, the Ravens will turn to DeShon Elliott to become the starting free safety. A sixth-round pick in the 2018 NFL Draft, Elliott has struggled to stay healthy and would be a massive downgrade from Thomas.

In recent days, the Cowboys have been busy clearing cap space that hinted a big move could be coming. The team released Gerald McCoy after his season-ending injury and recently restructured Tyron Smith’s contract.

Dallas’ interest in Thomas isn’t surprising. The team made a push for him last offseason and he would fill an obvious void in the secondary. It also helps that Thomas is a Texas native and the chance to return home is likely what he wants.

While Thomas can cause plenty of frustrations for coaches and teammates, there’s no denying the impact he makes on the field. A three-time member of the NFL’s first-team All-Pro roster, he has recorded 72 pass deflections, 30 interceptions and 11 forced fumbles in his NFL career.

The Cowboys already looked like a Super Bowl contender this season. If they can add Thomas to their defense, there is more than enough talent on both sides of the ball to win it all in 2020.