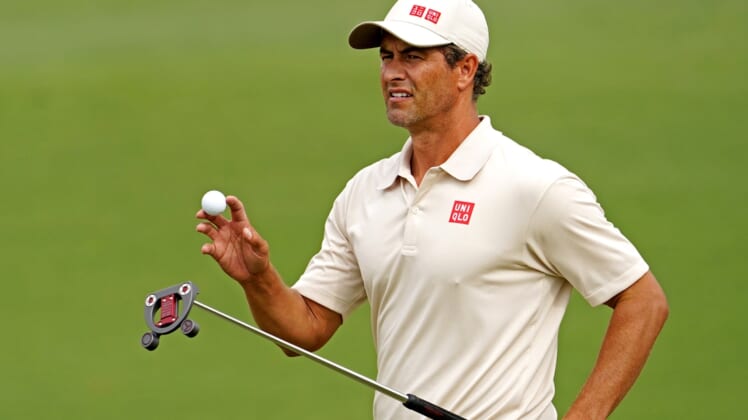 Apr 10, 2021; Augusta, Georgia, USA; Adam Scott reacts to his putt on the second green during the third round of The Masters golf tournament. Mandatory Credit: Michael Madrid-USA TODAY Sports

Australian Adam Scott opted out of the Olympic Games in Tokyo, his manager said Thursday.

“With the world being the way it is, Adam is gone 4-5 weeks at a time this year during his playing blocks,” Elliot told GolfChannel.com. “With three young children at home, this time in the schedule will be devoted to family. It is pretty much the only time up until October when he has a chance to see them for a stretch of time and not only a few days/a week.”

The Olympics golf tournament is scheduled for July 29-Aug. 1 at Kasumigaseki Country Club outside Tokyo, two weeks after The Open in England and a week before the WGC-FedEx St. Jude Invitational in Memphis.

Scott, 40, also opted out of the 2016 Summer Games in Brazil, citing the busy PGA Tour schedule and the Zika virus outbreak.

Ranked No. 35 in this week’s Official World Golf Rankings, Scott’s 31 professional wins include 14 on the PGA Tour. He won the Masters in 2013 for his only major championship to date.