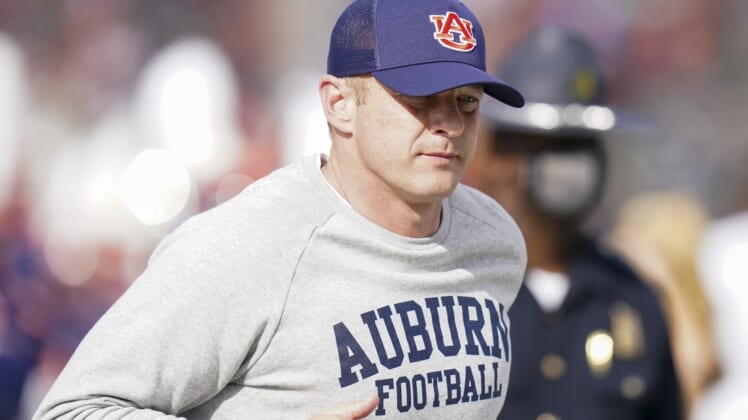 Auburn confirmed Monday it is gathering intel on football coach Bryan Harsin in the wake of multiple departures by players and staff members.

At least 18 players have entered the transfer portal and five assistant coaches have left the Tigers, who finished 6-7 in Harsin’s first season with the program in 2021.

“The Auburn administration is judiciously collecting information from a variety of perspectives, including our student-athletes, and moving swiftly to understand any issues in accordance with university policies and procedures,” read the Auburn statement.

“Decisions regarding the future of Auburn and its Athletics programs, as always, are made in the interests of our great university and in fairness to all concerned. We do not make institutional decisions based on social media posts or media headlines.”

Auburn president Jay Gogue addressed the situation at a board of trustees meeting last Friday.

“There have been a lot of rumors and speculation about our football program,” Gogue said. “I just want you know we’re trying to separate fact from fiction. We’ll keep you posted and make the appropriate decision at the right time.”

Earlier this month, offensive coordinator Austin Davis left the program only six weeks after getting hired. Among the players to transfer were quarterback Bo Nix, a three-year starter, and veteran running back Shaun Shivers.

Harsin told ESPN that players and coaches left for a variety of reasons, including better opportunities to play with another program or a new job. He refuted any accusations of mistreatment.

“Any attack on my character is bulls–,” Harsin said. “None of that is who I am.”

Harsin told ESPN he intends to be back for a second season.

“I’m the Auburn coach, and that’s how I’m operating every day,” he said. “I want this thing to work, and I’ve told our players and told everybody else there is no Plan B. I’m not planning on going anywhere. This was and is the job. That’s why I left the one I was in, to come here and make this place a championship program and leave it better than I found it.”

Harsin’s contract runs through the 2026 season at an average of $5.25 million per season. According to the Associated Press, Auburn would owe Harsin 70 percent of the remaining value — about $18 million — if he were fired without cause.