Frances Tiafoe celebrates a point win during his match against Sebastian Korda at the BNP Paribas Open in Indian Wells, October 9, 2021. Bnp Saturday 24

Zverev, who tallied eight aces and saved the only break point he faced against Alcaraz, owns a 5-1 head-to-head record against Tiafoe. Tiafoe trailed 5-3 in the second set before mounting his rally, breaking Sinner’s next two serves to even the match and breaking him twice more in the deciding set. 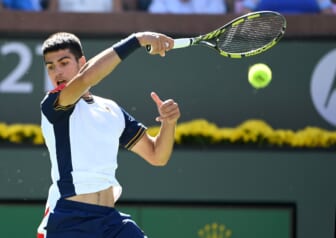 Unseeded Marin Cilic of Croatia advanced to his second tour-level final in as many weeks and will face fifth-seeded American Taylor Fritz for the title in St Petersburg, Russia.

Cilic, who lost to Aslan Karatsev in last Sunday’s final in Moscow, cruised to a 6-3, 6-3 victory in the semifinals over Dutch qualifier Botic van de Zandschulp. Cilic struck nine aces, won 87 percent of points on his first serve (27 of 31) and never faced a break point in the 67-minute match.

Fritz reached his first final of the season by rallying for a 5-7, 6-1, 6-3 victory against Germany’s Jan-Lennard Struff. Fritz fired four of his 10 aces in the deciding set, breaking Struff’s serve in the first and final games of the set.