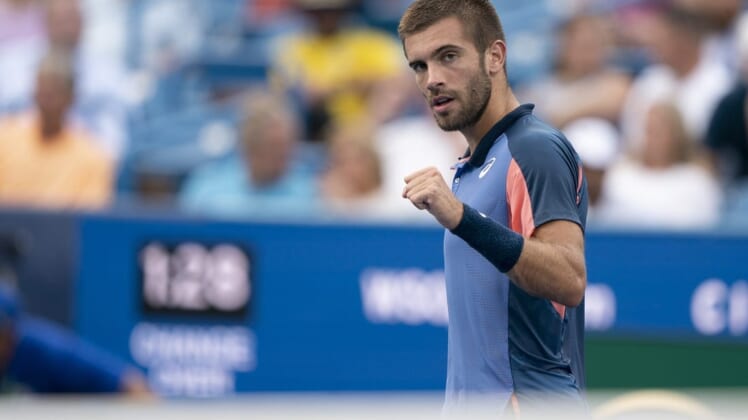 It was the first ATP Masters 1000 title for Coric, who was participating in his first tour-level final in two years.

The 25-year-old’s path to the championship was anything but easy, as he had to topple a number of challenging opponents that included Spaniards Rafael Nadal and Roberto Bautista Agut, and Canada’s Felix Auger-Aliassime.

“Thank you to my parents, who are not here, my sister and my team. It has been very tough for us,” said Coric, who came to Cincinnati on a protected ranking after missing a good portion of last season with a shoulder injury. “Then of course to my tennis coach, Mate. We have been working very hard and now we are here.”

Coric showed great resilience in the first set, trailing 3-0 and 4-1 before surging back to force a tiebreak, where he eventually dominated Tsitsipas.

“It was a very, very tough match. At the beginning, I wasn’t playing very well and he was pushing me very hard,” Coric said. “Then in the second set, I thought I played the best set of the whole year.”

While it may have been a good day for the Aussies, it was a completely different story for the Japanese duo of No. 3 seed Taro Daniel and eighth-seeded Shintaro Mochizuki.

Daniel fell to seventh-seeded American Emilio Nava 6-4, 3-6, 7-5 in the only second-round qualifying match that went three sets, and Mochizuki lost to No. 4 seed Marc-Andrea Huesler of Switzerland 6-2, 6-4.

In matches that were in the round of 64, France’s Richard Gasquet edged Poland’s Kamil Majchrzak 6-7 (5), 6-2, 1-0 before Majchrzak retired in the third set. South Korean Soonwoo Kwon and Brazil’s Thiago Monteiro were also victorious in their matches.