Andy Murray, who produced his best result in an injury-filled season last week, earned a first-round victory Tuesday in the San Diego Open.

Murray, a 34-year-old Brit who got the quarterfinals last week in Metz, France, fired nine aces against Kudla and never faced a break point. 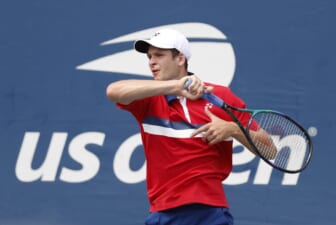 Belarus’ Egor Gerasimov saved a match point in the second-set tiebreaker and rallied for a 5-7, 7-6 (8), 6-3 win over Canada’s Vasek Pospisil in the first round at Sofia, Bulgaria.

Pospisil got the only service break of the first set in the final game, and neither player broke serve in the second set. Pospisil had a chance to close the match at 7-6 in the tiebreaker, but Gerasimov rallied to take the set, then jumped out to a 4-0 lead in the third set to pull away.