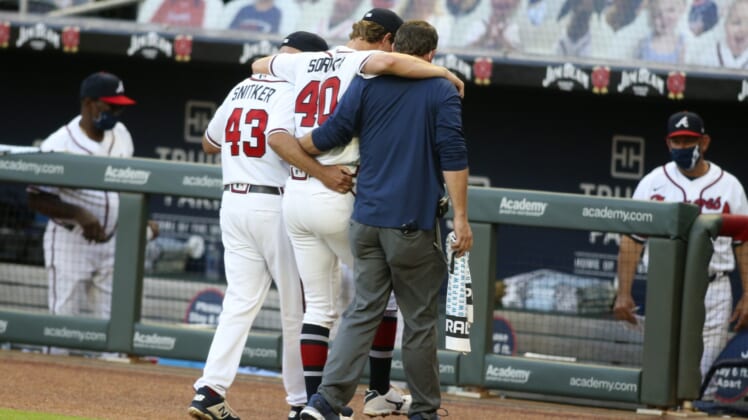 Atlanta Braves starting pitcher Mike Soroka will miss the remainder of the 2020 MLB season after suffering a torn right Achilles’ tendon, a devastating blow for a club with World Series aspirations this year.

Soroka suffered the injury during the third inning of Sunday’s game, collapsing to the ground while attempting to cover first base. Hours after being helped off the field, the team confirmed the crushing news.

Braves’ Mike Soroka out for season with torn Achilles

Atlanta’s 23-year-old ace took the hill on Monday, looking to build off a strong start to the season. In his first two starts, Soroka allowed just two runs in 11.1 innings. With the young righty showing even more growth on the mound, it looked like this would finally be the year the Braves could compete for the NL pennant and a potential World Series berth.

Unfortunately, the club’s hopes took a major blow following Soroka’s season-ending injury. Atlanta depended on him to carry the rotation this year, especially with Cole Hamels sidelined indefinitely and Mike Foltynewicz demoted after a rough outing.

Without their All-Star pitcher for the rest of the year, Atlanta might now need to call upon Ian Anderson. The 22-year-old has yet to make his MLB debut, but is rated as the organization’s third-best prospect by MLB Pipeline. He would join Kyle Wright, Atlanta’s fourth-best prospect coming into the year, in a very young and inexperienced rotation.