Astros rally to sweep Yanks in ALCS, will meet Phillies in World Series 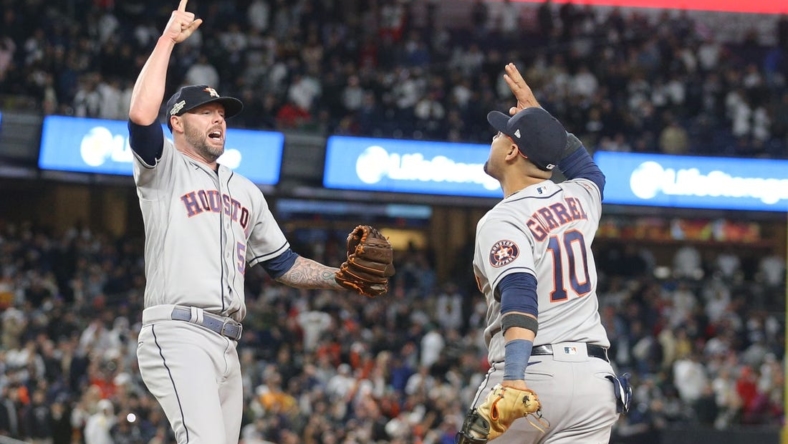 NEW YORK — Yordan Alvarez hit a game-tying single in the seventh inning and Alex Bregman followed with a go-ahead single as the visiting Houston Astros advanced to their fourth World Series in six seasons with a 6-5 victory over the New York Yankees Sunday night to complete a sweep of their best-of-seven American League Championship Series.

The Astros beat the Yankees for the third time to reach the World Series. After needing seven games in 2017 and six in 2019, the Astros finished off their first sweep in a best-of-seven series in team history with many fans clad in orange in the stands to watch the on-field celebration.

Houston will open the World Series Friday night at home against Philadelphia, which beat San Diego earlier Sunday. The Astros lost to the Phillies in the 1980 NLCS when both teams competed in the NL.

The Astros rallied from deficits of 3-0 and 5-4 and capitalized on shaky New York defense in the seventh to regain the lead.

With one out, Jose Altuve hit a ground ball to first baseman Anthony Rizzo, who was shifted away from the bag. Jonathan Loaisiga (0-1) slightly hesitated running off the mound and Altuve’s left foot hit the base first.

After replay upheld the call, rookie Jeremy Pena hit a grounder to second baseman Gleyber Torres. Torres fielded the ball but made a throwing error on a backhand toss to shortstop Isiah Kiner-Falefa.

Following the miscue, Alvarez stroked a single to right for a 5-5 tie. Bregman then lined a 2-2 sinker into center field off Clay Holmes for a 6-5 edge.

Pena hit a tying homer to help the Astros rally from an early 3-0 deficit and Yuli Gurriel hit an RBI single later in the third.

Harrison Bader hit his fifth homer of the postseason in the sixth to give the Yankees a short-lived 5-4 lead. Anthony Rizzo hit a tying single and an RBI double.

Torres and Giancarlo Stanton hit RBI singles in the first, but the Yankees were swept in a best-of-seven series for the first time since the 2012 ALCS against Detroit.

Lance McCullers allowed four runs (three earned) on eight hits in five innings. He struck out six and walked one.

Hector Neris ended the sixth by fanning Aaron Judge, and Bryan Abreu ended a 1-2-3 seventh by whiffing Torres. Rafael Montero worked a hitless eighth and Ryan Pressly closed out Houston’s fifth pennant-clincher by retiring Judge for the final out.