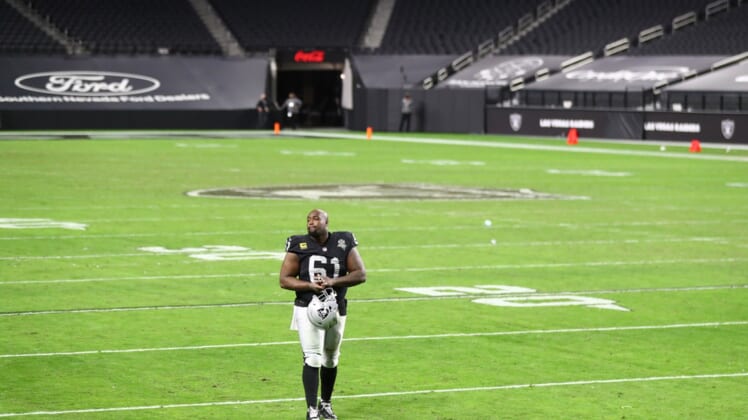 Center Rodney Hudson was traded from the Las Vegas Raiders to the Arizona Cardinals for a third-round pick on Wednesday, according to multiple reports.

Hudson was informed he would be released earlier in the week, but the Raiders reconsidered when the Cardinals increased their trade offer to a third-rounder, NFL Network reported. The Cardinals announced the move and said the terms of the deal include a seventh-round pick being returned from the Raiders.

A three-time Pro Bowl pick, Hudson turns 32 in July and twice was awarded with contracts from the Raiders that made him the highest-paid player at the position. That includes a three-year, $33.75 million extension with the Raiders in August 2019.

Hudson missed only one game the past five seasons. He joined the Raiders in 2015 as an unrestricted free agent after four seasons with the Kansas City Chiefs.

The Cardinals have been busy adding veterans with name value.

Also on Wednesday, Arizona agreed to a one-year deal with wide receiver A.J. Green worth up to $8.5 million with $6 million guaranteed, ESPN reported.

Green, 32, struggled to regain his form last season after making the Pro Bowl in his first seven seasons in Cincinnati. He had 47 catches for 523 yards with two touchdowns in 2020.

Earlier in the month, Arizona made a major splash with the addition of defensive lineman J.J. Watt. Watt requested his release from the Houston Texans and chose to sign a two-year, $31 million deal with the Cardinals.