Anthony Richardson leads Florida to upset over No. 7 Utah 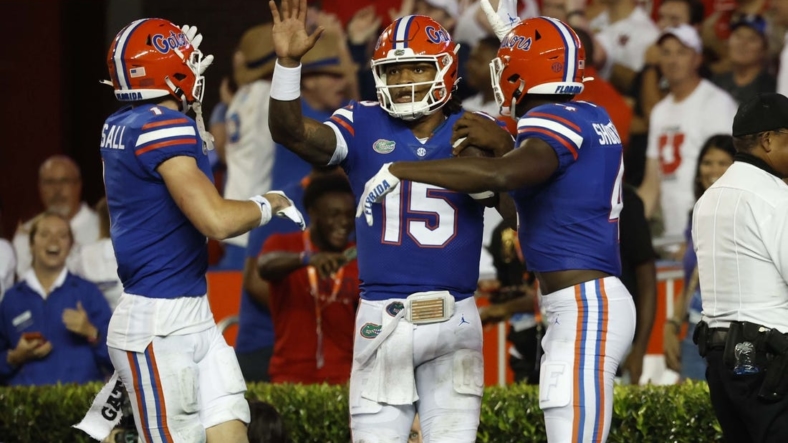 Anthony Richardson made a sensational season-opening statement, propelling host Florida to a 29-26 upset win over No. 7 Utah and delivering Billy Napier a win in his debut as Gators coach Saturday night in Gainesville, Fla.

In his second career start, Richardson showed his poise with a mistake-free performance. His game-winning 1-yard scoring carry with 1:25 left was his third touchdown run of the night. Richardson completed 17 of 24 passes for 168 yards and carried 11 times for 104 yards.

In the final minute, Cameron Rising had Utah on the verge of a win as he drove the Utes to the Gators 6. But Amari Burney made a diving interception in the end zone to seal the win.

Montrell Johnson Jr., a transfer from Louisiana who followed Napier to Florida, carried 12 times for 77 yards and a touchdown as he made amends for a fumble on the Gators’ first possession that set up a Utah touchdown.

Richardson’s final touchdown carry capped a 75-yard drive, which was highlighted by a 21-yard run by Trevor Etienne, who fumbled at the end of the carry but recovered the loose ball to keep the Gators’ hopes alive.

Utah took the early lead as Rising threw a 7-yard touchdown pass to Brant Kuithe for a 7-0 lead.

Florida retaliated with a 14-play, 63-yard drive, which Richardson capped with a 2-yard touchdown carry moments after converting on 4th-and-2 with a 14-yard pass in the flat to Johnson.

After Utah made field goals on consecutive possessions in the second quarter, Richardson scrambled out of the pocket and broke into the clear on a 45-yard touchdown run to give the Gators a 14-13 lead at the half.

In the third quarter, Rising directed an 89-yard drive, capped by a 7-yard touchdown run by Micah Bernard, which put the Utes up 19-14. In the march, Rising improvised for a 26-yard scramble and completed a 37-yard strike to Kuithe.

Florida retaliated with a touchdown drive led by Johnson, who carried for two first downs before scoring on a 14-yard run with 12:48 to go.