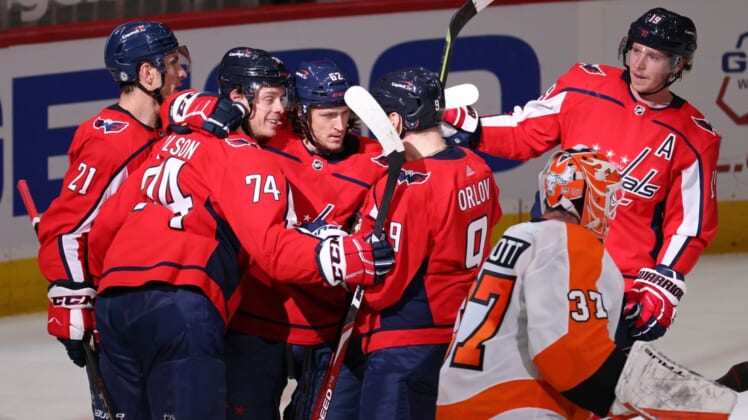 Newly-acquired forward Anthony Mantha finished with a goal and an assist as the Washington Capitals started quickly and defeated the visiting Philadelphia Flyers 6-1 Tuesday night.

The Caps made a deal with Detroit for Mantha just before Monday’s trading deadline, put him on the second line with Nicklas Backstrom and T.J. Oshie, and everything clicked. Mantha came at a price, as Washington gave the Red Wings forwards Jakub Vrana and Richard Panik plus a first-round pick in the 2021 draft and a second-round selection next year.

Mantha, who finished with a team-high six shots, recorded his assist during the four-goal first period that helped Washington take command. His goal came in the second period on a blistering shot from between the circles that beat Philadelphia goalie Brian Elliott.

John Carlson played in his 800th career game — all with the Caps — and reached another milestone with his two assists. That gave him 400 for his career.

Conor Sheary added a goal and two assists for Washington while Backstrom, Alex Ovechkin and Tom Wilson each recorded a goal and an assist. Carl Hagelin scored the other Caps’ goal.

Washington now has won three straight and scored 18 goals in doing so. Goalie Ilya Samsonov made 29 saves and earned the victory.

Washington also scored three power-play goals for the second straight game. The Caps went 3-for-3 in this one after finishing 3-for-6 in extra-man chances in Sunday’s 8-1 win at Boston.

Sheary started the four-goal first period with a goal at 7:07. The Flyers tied it after a turnover by Samsonov while trying to clear, and Sean Couturier then deflected a James van Riemsdyk shot past the goalie.

But it was all Caps after that. Wilson and Backstrom scored power-play goals — the latter coming off of a quick cross-crease pass from Ovechkin — before Hagelin gave Washington a 4-1 lead with 1:39 left in the first period. Washington finished with 19 shots in the period.

Mantha scored his goal in the second period before Ovechkin beat Elliott through a narrow window on the short side in the third.