Anthony Davis plans to return for Lakers Thursday vs. Mavs 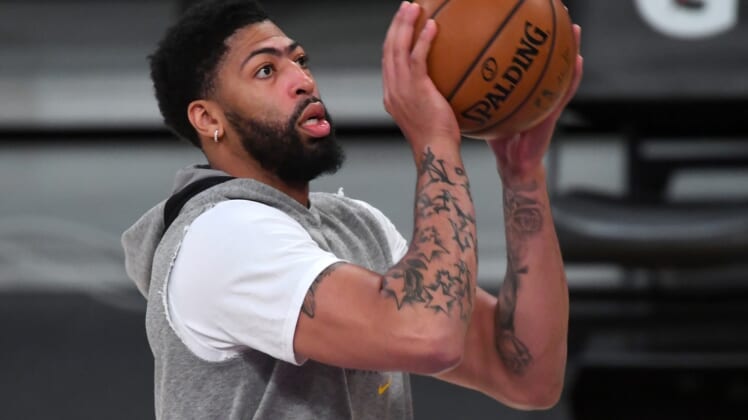 Los Angeles Lakers star Anthony Davis said he plans to return to the court Thursday against the Dallas Mavericks as long as he feels ready the day of the game.

The Lakers listed Davis as questionable for the contest.

Davis has missed two-plus months of the season with a calf injury that he described to reporters Wednesday as a “ripping” feeling when he aggravated it Feb. 14 against the Denver Nuggets.

Earlier in the week, Lakers coach Frank Vogel hinted that Davis’ return was on the way, and his conditioning was the final step of the process.

“He’s healthy,” Vogel said. “But having not played and not really being able to ramp up his physical on-court activity over the last two months, it’s going to take some time before he gets his wind under him and obviously, that’s the biggest thing. Because if his legs aren’t under him, we don’t want him to be at risk for re-aggravation of the injury or another injury. We want to keep a close eye on that.”

Davis has missed the last 30 games with the injury and Los Angeles is just 14-16 without his services.

In 23 appearances this season, the eight-time All-Star has averaged 22.5 points, 8.4 rebounds and 1.8 blocks per game.

Once Davis is back, the final missing piece for the Lakers is LeBron James, who suffered a right high-ankle sprain on March 20. James began to do “light work” on the court again, according to Vogel.

Thursday’s game is the opener of a four-game road trip, beginning with two games in Dallas.