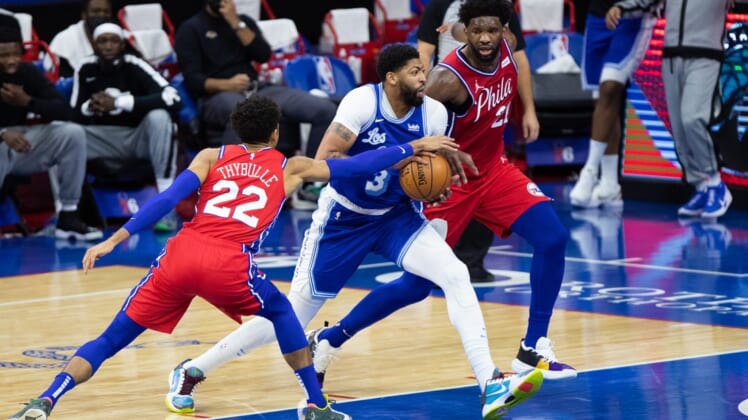 The Anthony Davis injury we witnessed Sunday evening was scary for pretty much everyone who follows the Los Angeles Lakers and broader NBA world.

In just his second game back after suffering from Achilles’ discomfort, the Los Angeles Lakers star went down in the first half against the Denver Nuggets with what was seemingly yet another Achilles’ injury. Some feared the worst initially.

While Davis and his Lakers did receive some good news after conducting an MRI on Monday, the NBA champion is going to miss some time.

“Anthony Davis will be re-evaluated in two to three weeks after suffering a calf strain,” ESPN’s Adrian Wojnarowski reported. “Davis underwent an MRI today, which revealed a re-aggrevation near his Achilles. Lakers and Davis will be conservative on a return to play, which could be sometime after the All-Star Break running March 5 to 10.”

There’s certainly a lot of layers to this. When Davis first went down Sunday evening, it reminded us a lot of the torn Achilles’ then-Warriors star Kevin Durant suffered during the 2019 NBA Finals. Remember, Durant had missed substantial time earlier in the playoffs with a calf strain.

Some believe that Durant’s willingness to rush back from said calf injury led to him tearing his Achilles. With that as a backdrop, the expectation here is that these Lakers will play it safe with the Anthony Davis injury.

The defending champs find themselves at 21-7 on the season. Taking it slow with Davis will not have an impact as the Lakers vie for back-to-back titles. Rushing him back could have huge long-term ramifications.