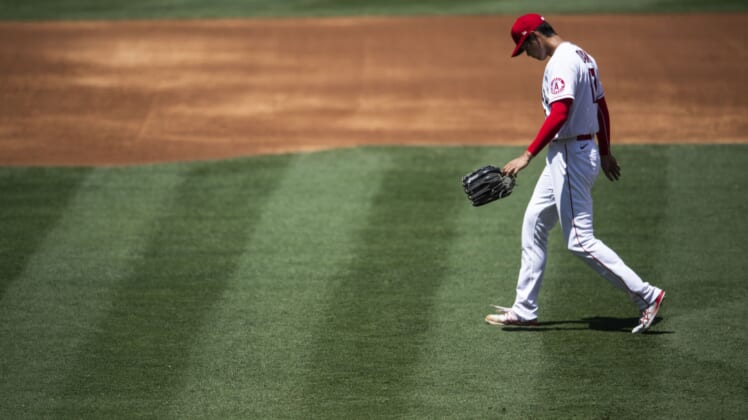 Los Angeles Angels two-way star Shohei Ohtani came into the 2020 MLB season hoping to finally breakout as both a pitcher and a hitter. After just two starts, the 26-year-old’s season on the mound could now be over.

Ohtani took the mound on Sunday, hoping to rebound after a brutal start in his return from Tommy John surgery. Instead, he lasted just 1.2 innings and departed with five walks allowed and pain in his throwing arm.

Los Angeles’ star underwent an MRI on Sunday night and the results didn’t provide the team with a sigh of relief. The 26-year-old suffered a grade 1-2 strain of his flexor pronator mass, also known as a flexor strain, putting a return to the mound this year in jeopardy.

As described by ESPN’s Jeff Passan, the nature of the injury is particularly concerning. The forearm plays a crucial role for pitchers in lessening the force the elbow receives. Now with a forearm strain, Ohtani’s surgically-repaired elbow ligaments would be under even more pressure.

In the best-case scenario for the Angels, Ohtani can begin throwing again by the second week of September. At that point, the regular season will almost be over and he won’t have time to build up the workload to be a starter.

The likeliest outcome is Ohtani is eventually shut down from pitching. The Angels can let him focus at the plate, which the team is keeping open by listing him day-to-day as a designated hitter.

We know Ohtani can do incredible things at the plate. Across 737 career at-bats, he has 42 home runs with a .281/.345/.528 slash line and 23 stolen bases. Los Angeles will certainly take that, but it’s disappointing that this hyped two-way star has largely become just an ordinary DH.