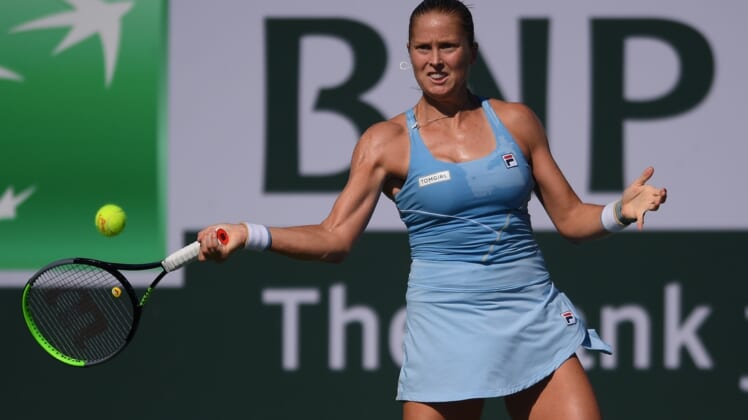 Aliaksandra Sasnovich of Belarus continued her solid play, knocking off a Grand Slam champion for a second straight match with a 7-5, 6-4 victory over No. 11 seed Simona Halep of Romania to reach the round of 16 on Sunday in the BNP Paribas Open at Indian Wells, Calif.

Americans Shelby Rogers and Jessica Pegula moved onto the round of 16.

The No. 100-ranked Sasnovich eliminated reigning U.S. Open champion Emma Raducanu in the second round, then took 98 minutes to dispatch of Halep.

With the victory, Sasnovich will face No. 27 seed Victoria Azarenka of Belarus, a 7-5, 6-4 winner over No. 7 seed, Petra Kvitova of Czech Republic.

Rogers will face the winner between Canadian Leylah Fernandez and Anastasia Pavlyuchenkoa of Russia.

With the victory, Svitolina improved to 3-0 against Cirstea.

“It was a very tough match today, and I was fighting and trying to find my game,” Svitolina told reporters afterwards. “It was a bit of a rollercoaster.

“I wish I could play a little bit better in the first set. I had chances to grab that set, but unfortunately it didn’t play the way I wanted. I had to fight for every point, and Sorana played a great match, I think. I’m happy that I could win today.”

Svitolina will play Pegula in the round of 16 after the American was a 6-4, 6-1 winner over Jasmine Paolini of Italy.