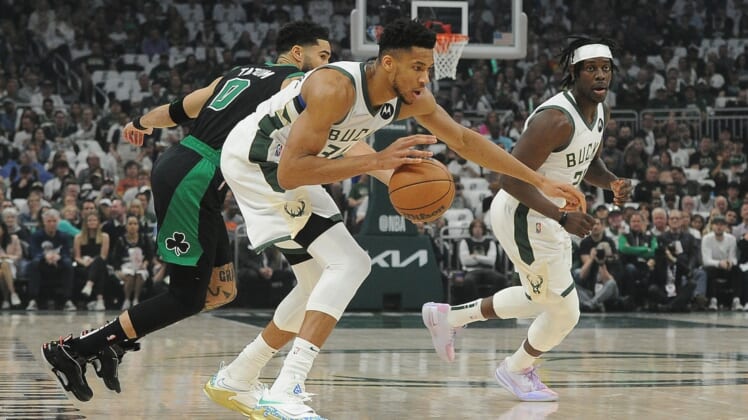 Al Horford poured in a career-playoff-high 30 points as the visiting Boston Celtics earned a 116-108 win over the Milwaukee Bucks on Monday night to even their Eastern Conference semifinal series at two games apiece.

The 15-year NBA veteran shot 11 of 14 from the field, including a 5-of-7 mark from 3-point range, to swing homecourt advantage back in Boston’s favor. The Celtics overcame an 11-point, third-quarter deficit.

Game 5 in the best-of-seven series is scheduled for Wednesday in Boston.

Jayson Tatum also had 30 points and grabbed 13 rebounds for the Celtics, and Jaylen Brown and Marcus Smart both tallied 18 points. Smart dished out eight assists.

Giannis Antetokounmpo was outstanding once again, pacing Milwaukee with 34 points, 18 rebounds and five assists. He shot 14 of 32 from the floor.

Boston went on a 10-0 run spanning the third and fourth quarters to tie the game, and the Celtics outscored the Bucks 43-28 in the final period. It was the Celtics’ highest-scoring quarter through eight postseason games this year.

The Bucks had made their move in the third quarter behind 13 points from Antetokounmpo, leading by as much as 76-65. The Celtics pulled within seven by the start of the fourth.

After once leading by 10 in the first half, the Bucks went into the break with a narrow 48-47 lead.

Antetokounmpo led all scorers with 15 points and 11 rebounds before halftime and was the only Milwaukee scorer in double figures.

The Bucks were extremely active on defense in the opening half, turning seven Boston turnovers into 11 points. Milwaukee also won the battle on the glass prior to halftime, hauling in 29 rebounds compared to the Celtics’ 21.

Brown and Horford each went for 11 points, and Tatum added nine despite going just 1-of-6 from beyond the arc.