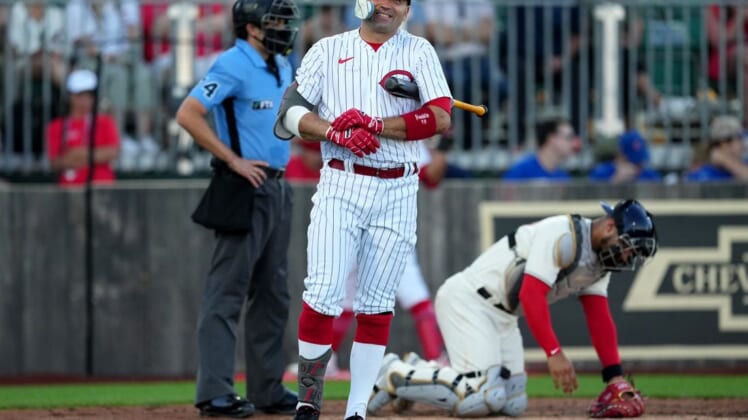 The Cincinnati Reds will hit the road to face the Pittsburgh Pirates on Friday not long after their first baseman, Joey Votto, undergoes season-ending shoulder surgery.

A victory could go a long way toward raising the spirits of their star, who will have a torn left rotator cuff repaired Friday afternoon.

The truth is that Votto has not been productive for some time as his shoulder has deteriorated. He did not play Wednesday in a 1-0 victory over the Philadelphia Phillies, then announced his pending surgery after the game.

Votto ended his season in the midst of a career-worst 0-for-22 slide that dropped his batting average to .205.

“It’s a big blow,” Reds manager David Bell said. “Obviously we’re going to miss him a ton. I have no idea how he was … trying to play this game with a torn rotator cuff.

“I was lucky enough to talk to the doctors. They were very clear this has to get done in order to get Joey back healthy for next season. As much as we’ll miss him now, that’s kind of what I’m looking forward to.”

The Reds at least got a bit of good news with the Wednesday victory. Left-hander Nick Lodolo held the Phillies scoreless over seven innings, and a ninth-inning RBI single from Jose Barrero gave Cincinnati a walk-off win.

Next up to try to give an inconsistent Reds offense the chance at victory will be rookie right-hander Graham Ashcraft (5-3, 3.96 ERA), who will be facing the Pirates for the first time in his career.

Over his past four outings, Ashcraft has a 2.33 ERA over 27 innings. He took the loss against the Chicago Cubs on Saturday, when he gave up four runs (three earned) over 6 1/3 innings. It was his first defeat over his past seven starts.

In two previous starts against the Reds, including one this season, Wilson is 0-2 with a 2.84 ERA. He gave up just one earned run over 6 2/3 innings in a July 7 defeat to the Reds.

After opening August with three consecutive victories, the Pirates have endured a rough time. However, they ended a six-game losing streak with an 8-2 victory over the Boston Red Sox on Thursday as Bryan Reynolds hit two home runs.

Reynolds now has four home runs over the past four games and 20 on the season.

The two on Thursday were the 2,999th and 3,000th regular-season homers in the history of Pittsburgh’s PNC Park — and they came on what would have been the 88th birthday of former Pirates great Roberto Clemente, who finished his career with exactly 3,000 hits.

“That’s crazy,” Reynolds said on the AT&T SportsNet Pittsburgh broadcast. “That’s some incredible history I get to be a part of. Just (to be) a little part of it is something special.”