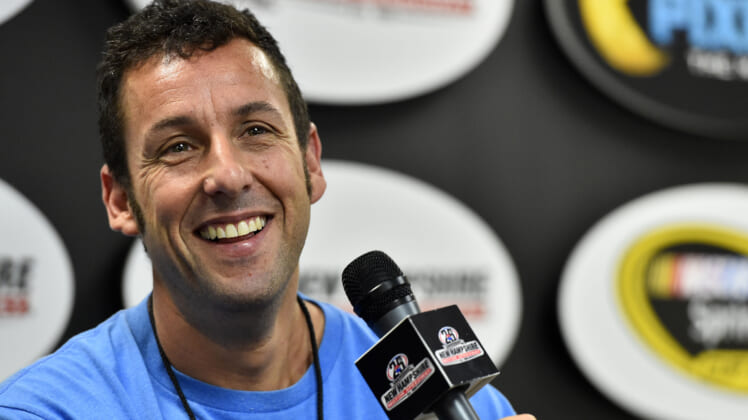 Comedian Adam Sandler has become known for several different projects since his acting career began back in 1987. Having appeared in several sports-related movies from Happy Gilmore, The Waterboy, The Longest Yard, and Uncut Gems, it’s become obvious, Sandler is a huge sports fan.

He can commonly be seen courtside at NBA games, and even made a point to connect with Anthony Edwards of the Minnesota Timberwolves on November 12 at the Staples Center before a matchup with the Los Angeles Lakers.

That connection might have led to a future gig for Ant, starring in his first major motion picture, along with several other basketball stars.

As we’ve heard rumors of for years now, it appears the movie Sandler has been working on behind the scenes, titled ‘Hustle’ is set to be released via Netflix on June 8. Sandler shared a 2:31 trailer previewing the movie today on Twitter.

The story centers around Sandler, who plays Stanley Beren, a former NBA scout looking to get back in good graces. While in Spain, Sandler identifies a talented basketball prospect playing street ball and works to bring him stateside in the hopes of a career rejuvenation while trying to help Bo Cruz (Juancho Hernangomez) become an NBA star.

Not only does Hustle feature Sandler himself, he’s also bringing along other notable names such as Robert Duvall, Queen Latifah, Jaleel White, and David Hammond and many others.

But this film will become more known for the NBA stars, which is just easier to list in no particular order.

Here is the full cast and crew according to IMDB.

The movie’s producers include LeBron James and Maverick Carter, with Sandler being an executive producer.

The film can be found on Netflix starting June 8.