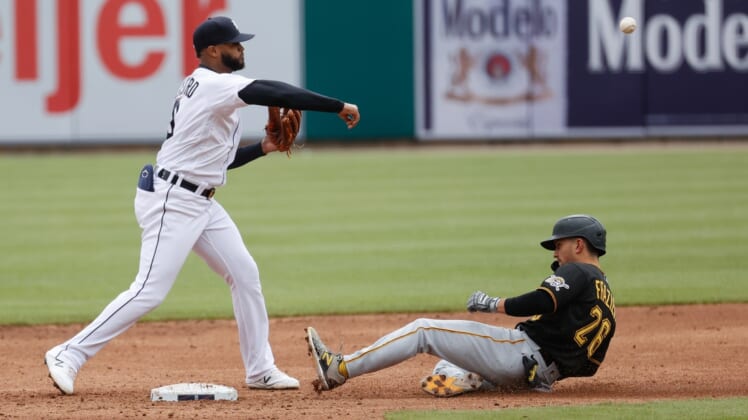 Colin Moran drove in the go-ahead run for Pittsburgh, while Bryan Reynolds reached base three times, scored two runs and drove in another.

Starting pitcher Mitch Keller gave up two runs on five hits with five strikeouts in five innings. Sam Howard (2-1) got two outs in relief and picked up the win. Richard Rodriguez recorded the final three outs for his third save.

JaCoby Jones hit his first homer of the season for Detroit, while Akil Baddoo supplied two extra-base hits and drove in a run. Jose Urena pitched seven innings and gave up two runs on five hits. Jose Cisnero (0-1) was tagged with the loss.

Frazier sparked the Pirates’ two-run first inning with a leadoff double. One out later, he scored on Reynolds’ single to center. Reynolds moved up on a groundout and scored when Gonzalez dropped another single in front of center fielder Jones.

The Tigers scored a two-out run in the second. Niko Goodrum ripped a double and Baddoo followed with a liner that eluded center fielder Reynolds and bounced to the wall for a triple.

After the first two batters struck out in the bottom of the fifth, Jones tied the game for the Tigers with an opposite-field homer.

Jones robbed Todd Frazier of an extra-base hit in the seventh with a running catch into the left-center gap.

Baddoo chased Phillip Ervin to the left-field wall with a long fly in the bottom of the inning. The ball bounced off Ervin’s glove and into the field of play as Baddoo cruised into second with a double. Jones ripped a one-out single off Duane Underwood Jr. to put runners on the corners. But Howard came in and recorded two outs, leaving the runners stranded.

Pittsburgh took the lead in the next inning. Adam Frazier ripped a one-out single off Cisnero. With two out, Frazier advanced to second on a wild pitch by Gregory Soto.

Each team had nine hits.