Aaron Rodgers doesn’t back down on criticism of teammates 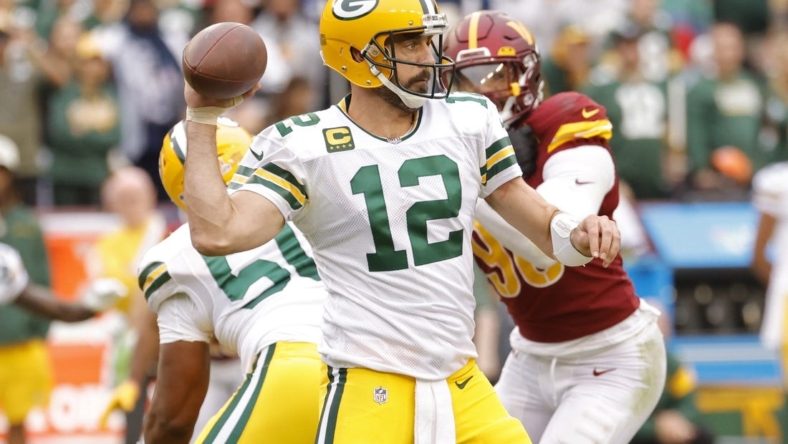 One day after taking shots at his Green Bay teammates, Packers quarterback Aaron Rodgers stood by his remarks on Wednesday.

The Packers are off to a 3-4 start after losing their past three games.

Speaking Tuesday on “The Pat McAfee Show,” Rodgers said that Green Bay players “who are making too many mistakes shouldn’t be playing. Gotta start cutting some reps. And maybe guys who aren’t playing, give them a chance.”

He was back in the locker room on Wednesday and reported no blowback from his teammates or coaches.

“If one of those guys has a problem with it, I’m right here, and I’d love to have a conversation,” Rodgers said. “I enjoy those conversations. I enjoy any type of conflict like that because I know the resolution on the other side is going to make us a better unit, a better friendship, a better cohesion on the field.

“But nobody’s come to me and said, ‘I’ve got a problem with what you said.’ I think everybody knows, Matt (LaFleur, the head coach) included, that everything’s got to take a little uptick, get a little better.”

LaFleur backed up his quarterback.

“We have to be truthful with one another,” the coach said. “Sometimes the truth hurts. … I don’t think he publicly called out individuals, I don’t believe, I didn’t sit there and listen to the whole thing, so I just think that you have to get to the root of the truth.”

Rodgers added, “I don’t think it should be a problem to any of those guys to hear criticism. We all hear criticism in our own ways, and we’ve all got to be OK with it and take it in, process it, and if it doesn’t fit, it doesn’t fit. But if it fits, we’ve got to wear it and improve on those certain things.

“I said it. I’m not going to be a robot. I don’t understand why people have a problem with things that are truthful. I’m calling things the way I see it. People who don’t think I need to air that stuff out, that’s their opinion. But I’m doing what I think is in the best interest of our guys.”

He is averaging 228.1 passing yards per game, his lowest figure since becoming a regular starter in 2008, though a suspect receiving corps shoulders some of the blame in that department.