76ers’ Matisse Thybulle ‘ineligible to play’ in Toronto on Thursday 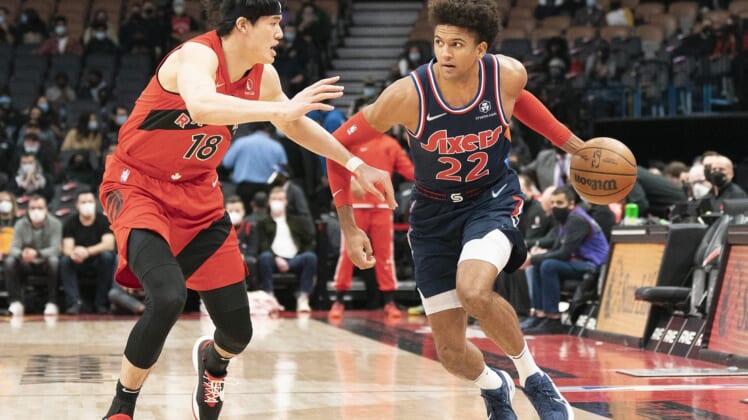 Philadelphia 76ers defensive stalwart Matisse Thybulle was listed as “ineligible to play” in the team’s Thursday road game against the Toronto Raptors, with speculation that his COVID-19 vaccination status could be hindering his ability to suit up.

The team declined to provide details Wednesday on why the third-year guard was not cleared to face the Raptors, with several media outlets openly insinuating that Thybulle may not be vaccinated.

If current NBA standings entering Wednesday were to hold, the 76ers (49-30) and Raptors (46-33) would be pitted against in each other in the first round of the Eastern Conference playoffs as the No. 4 and 5 seeds. Barring any unforeseen changes to Canada’s rules that require all incoming visitors to the country be fully vaccinated, Thybulle could miss multiple games of a potential seven-game series against Toronto.

Thybulle, 25, has not publicly shared whether he has gotten the COVID-19 vaccine, but he did express annoyance in January after he was sidelined for the second time this season under the NBA’s health and safety protocol.

“Very frustrating, especially as the rule changes come and go on a whim, it feels like. It gets confusing,” Thybulle said at the time. “And for a recently recovered player to get tested so soon, the concern would be false positives. To draw positives and inconclusives and have to sit out for almost a week is a little frustrating.”

Thybulle is averaging 5.8 points and 2.3 rebounds in 64 games this season, but he has started a career-high 49 times — mostly on the strength of his ball-hawking defense. Thybulle entered Wednesday tied for third in the league with an average of 1.8 steals, also a career high. He was named to the NBA’s All-Defensive second team in 2020-21.

A win for the Sixers on Thursday in Toronto would secure home-court advantage in the opening round of the playoffs, which begins April 16 following the play-in tournament held from Tuesday through April 15.