The 2015 NBA draft concluded without a whole bunch of drama. Reports of there being multiple trades early in the first round gave in to the first 14 picks coming and going without any deals. DeMarcus Cousins wasn’t traded. There was no huge trade up from the Boston Celtics. And in reality, it was kinda boring.

Though, teams made some interesting picks throughout the night. Here are six quick takeaways from the 2015 NBA draft. Check out our reactions as the picks happened right here. 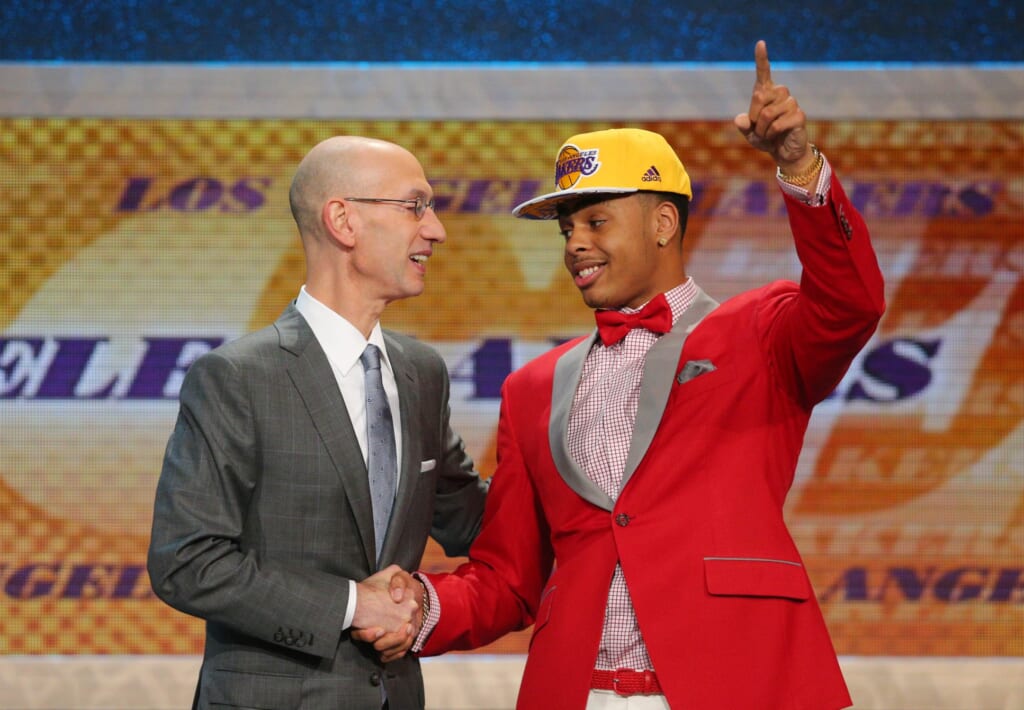 Courtesy of USA Today Sports: The Lakers have a plan. Let’s see if it comes to fruition.

By passing up on Jahlil Okafor for D’Angelo Russell with the second pick on Thursday night, the Lakers have made it clear that they are going after an upper-echelon big man during free agency. In fact, the Lakers might be relying on adding a big man at this point. The idea of giving up an opportunity to select the most-polished scoring big man to enter the NBA in a few years might be insane. But if the Lakers pull this off, they could very easily find themselves in contention in the not-so-distant future.

Russell, who can play both the point and off-guard positions, will start out of the gate. It’s now all about the Lakers being able to team him up with a LaMarcus Aldridge, Kevin Love or DeMarcus Cousins. And while most of the focus here has been on Cousins, recent reports suggest that Aldridge is interested in joining the Lakers.

A rotation of Jordan Clarkson, D’Angelo Russell, Julius Randle and one of the big men listed above doesn’t sound too bad moving forward. At the very least, it’s a start.

2. The Minnesota Timberwolves Are Doing it Right

Leading up to the draft, the only pick in the top five that didn’t have drama surrounding it was the first overall selection. Everyone knew Minnesota was going to pick up former Kentucky big man Karl-Anthony Towns—a move that will give the team a dominating presence inside. If Towns develops an above-average offensive game, he’s going to be a great pick down the road.

However, Minnesota’s best selection came when it picked up former Duke point guard Tyus Jones in a trade with the Cleveland Cavaliers. By virtue of dealing two second-round picks, Flip Saunders and company were able to get a player that provides the team more range from the point guard position than Ricky Rubio.

Minnesota likely won’t be in position to contend for a playoff spot any time soon, but it has a solid young core to build around.

3. Sam Hinkie and the Philadelphia 76ers Don’t Care About Needs

After selecting Nerlens Noel (6-foot-11) and Joel Embiid (7-foot) in the top-10 of the past two drafts, the Sixers tripled down with big man Jahlil Okafor with the third pick in the 2015 draft on Thursday night. The Duke product stands at 6-foot-10 and weighs about 280. If Philadelphia was going for a team of giants set to create destruction in the low post, it succeeded big time.

While Philadelphia would have definitely taken D’Angelo Russell if the Lakers had let him slide to three, the question now becomes whether the team will even be able to form a backcourt. It remains to be seen whether Hinkie’s plan of going best player available will pan out, but the team did add a player in Okafor who boasts the best set of offensive skills from the low post in the entire draft.

There should be a some sort of crime for what Riley and the Heat did on Thursday night. They almost literally stole one of the top all-around players to enter the draft in a couple years with the 10th pick. Winslow, who will likely need to find a more consistent perimeter shot, excels in every other aspect of the game. At 6-foot-8 and 225, the Duke product can guard four different positions on the court. A stretch-4 if there ever was one, Winslow can also jump out and hit the intermediate shot on a consistent basis. He’s a plus-level ball-handler, has great court vision and will help Miami push the tempo. In addition to this, Winslow should be able to make an immediate impact. It really was the steal of the lottery.

5. Trades will be Made

With some of the selections early on Thursday night, we will likely see veterans traded in the coming weeks. The Utah Jazz, who selected former Kentucky power forward Trey Lyles at 12th overall, come to mind first. Derrick Favors could very well be on the chopping block here:

Another team to check up on, and we mentioned them above, are the Philadelphia 76ers. General manager Sam Hinkie has to have something up his sleeve here, right? Interestingly, the Boston Celtics added a point guard in Terry Rozier with the 16th pick. Remember those reports of a potential trade surrounding Sixers big man Nerlens Noel and Celtics guard Marcus Smart? I wonder if rumors will start to heat up on that front. In any event, Philadelphia might look to move one of their towering figures for a proven guard. It sure does have the assets here.

Love Looney to the Warriors. Hip injury may hold him back temporarily. But lottery talent there. Could be steal of the draft.

Not too often do you see a player that was in attendance in the green room last until the final pick of the first round. Unfortunately for former UCLA standout  Kevon Looney, this is exactly what happened. Concerns over the possibility of the 6-foot-9 power forward having to undergo hip surgery likely dropped his stock. However, there is little doubt that he possesses the necessary skill and physicality to be a good player in the NBA.

Looney, 19, needs to improve from an offensive standpoint, but he can sure play defense at such a young age. He averaged 11.6 points and 9.2 rebounds per game as a freshman for the Bruins last year. Put him in there behind Draymond Green and Andrew Bogut, and see how his game improves over the next season or two. It was the perfect value pick for a team that didn’t really have any needs.