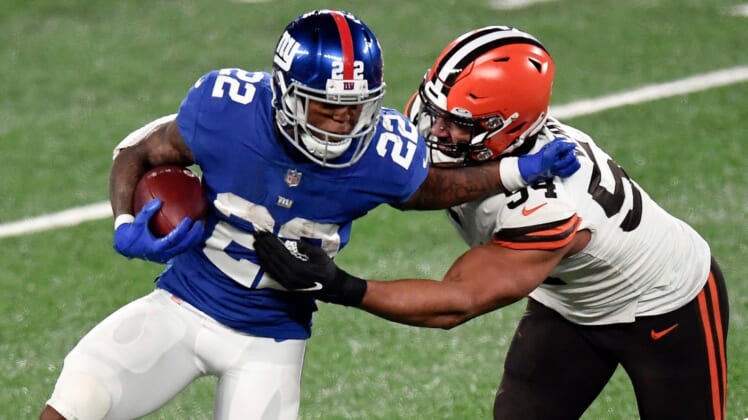 New York Giants running back Wayne Gallman (22) stiff-arms Cleveland Browns defensive end Olivier Vernon (54) in the second half. The Giants lose to the Browns, 20-6, at MetLife Stadium on Sunday, December 20, 2020, in East Rutherford.Nyg Vs Cle

The San Francisco 49ers announced the signing of running back Wayne Gallman to a one-year deal, while NFL Network reported that the team also added defensive end Arden Key.

The New York Giants selected Gallman in the fourth round of the 2017 draft, and the back played there for four years before leaving the team in free agency.

Used primarily as a change-of-pace back during his time in New York, he ended up starting 10 games in 2020 following an early season injury to Saquon Barkley. Gallman, 26, led the team in rushing attempts (147), rushing yards (682) and rushing touchdowns (six) — all single-season career highs.

With the Giants, Gallman rushed for 1,444 yards on 338 attempts and scored 11 touchdowns — nine rushing and two receiving. He joins a running back room in San Francisco led by Jeff Wilson and Raheem Mostert.

Key, who turns 24 next month, was waived last week by the Las Vegas Raiders after three seasons with the team. The 2018 third-round pick from LSU has managed just three sacks in his career, including zero over 14 games in 2020.

He has 49 career tackles (eight for loss) and 26 quarterback hits. He played 40 percent of the team’s defensive snap counts last season.