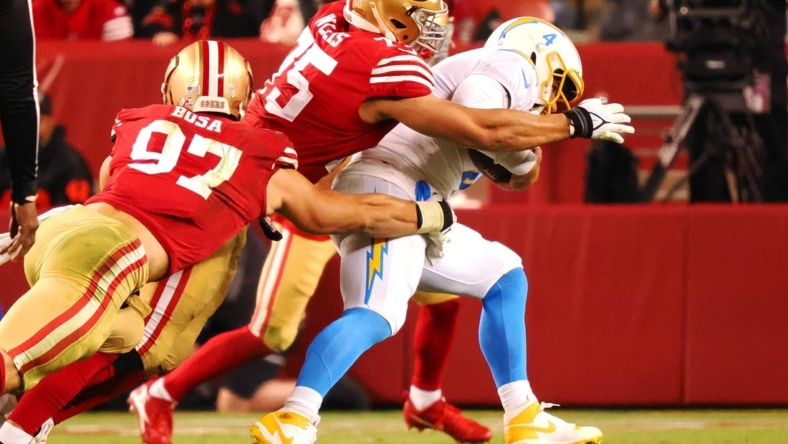 Christian McCaffrey scored on a 2-yard run with 7:54 remaining to give the San Francisco 49ers their first lead on the way to a 22-16 victory Sunday night over the visiting Los Angeles Chargers.

McCaffrey, who played in his third game with the 49ers after he was acquired in a trade from the Carolina Panthers, rushed for 38 yards and scored his fourth TD for San Francisco, including a passing score in Week 8. Elijah Mitchell had 89 yards rushing for the 49ers.

Jimmy Garoppolo had 240 yards passing and a rushing TD for the 49ers (5-4). After missing a game because of a hamstring issue, 49ers wideout Deebo Samuel had two receptions and 27 yards rushing.

Justin Herbert passed for 196 yards with a touchdown and an interception for the Chargers (5-4), who scored a touchdown on their opening drive and then never found the end zone again. Austin Ekeler had seven receptions and 24 rushing yards for the Chargers.

After McCaffrey’s late touchdown gave the 49ers a 19-16 lead, Robbie Gould made a 20-yard field goal with one minute remaining for the final margin. The Chargers had one last drive but Herbert was intercepted by Talanoa Hufanga.

Despite the 49ers’ offensive firepower, it was the Chargers that got off to the fast start, taking a 7-0 lead when Herbert capped the opening seven-play, 75-yard drive with a 32-yard touchdown pass to DeAndre Carter.

The 49ers found the end zone for the first time on Garoppolo’s 1-yard TD run with 1:57 remaining in the first half to pull within 13-10. The Chargers took a 16-10 lead into halftime after Dicker’s 40-yard field goal.

Los Angeles played without defensive tackle Otito Ogbonnia, who had a left leg injury on the 49ers’ opening drive. Chargers defensive tackle Christian Covington left in the third quarter and did not return.

San Francisco linebacker Dre Greenlaw was ejected with 30 seconds remaining in the first half after a helmet-to-helmet hit on Herbert.