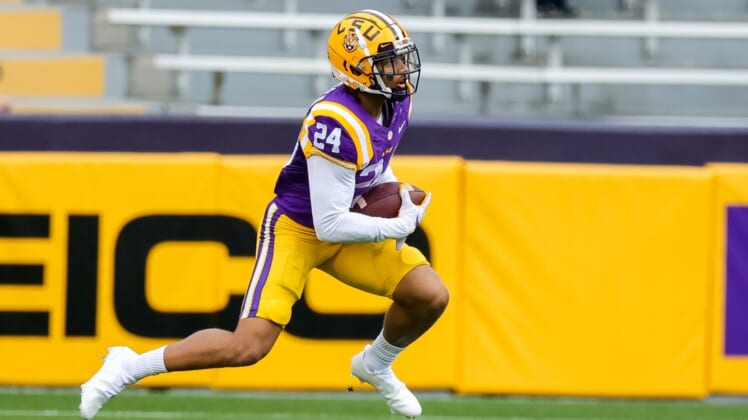 With the 2021 NFL Draft in the books, the next class is right around the corner.

Here are the top prospects to watch one year before the Class of ’22 crosses the draft stage:

1. Josh Jobe, CB, Alabama: A fluid athlete who can stick to receivers with ease, Jobe’s potential is near the top of any player in the 2022 class.

2. Jordan Davis, DT, Georgia: Monstrous nose tackles with the athleticism and power that Davis generates aren’t common. His disruptiveness sets him apart from others.

3. Chris Olave, WR, Ohio State: A smooth operator with refined route-running and ideal athleticism for the position, Olave’s decision to return for another year was a surprise.

4. Darian Kinnard, OT, Kentucky: Long, strong and mean as a junkyard dog. Kinnard gets around quite well as a 345-pound right tackle, and his imposing style will bode well in the NFL.

5. Boye Mafe, DE, Minnesota: One of the freakiest athletes to come out of college in years. If he hones his technique as a senior he’ll be viewed as a possible top prospect.

8. Myjai Sanders, DE, Cincinnati: He’s a prototypical defensive end with good length and burst for the position. Another year to clean up his hands could lead to a boom in draft stock.

10. Lecitus Smith, OG, Virginia Tech: A man mover who will send the bodies flying in the run game, Smith’s nasty streak and natural power makes him a high-floor prospect.

1. Derek Stingley Jr, CB, LSU: Going back to his true freshman year, Stingley has been billed as a superstar. He has elite length, fluidity and ball skills. It’s hard to find a better-looking athlete at the position.

2. Kayvon Thibodeaux, DE, Oregon: A former top recruit with excellent burst and athleticism, Thibodeaux is scheme versatile and will only get better as he improves his pass rush arsenal.

3. Kyle Hamilton, FS, Notre Dame: It shouldn’t be possible for a 6-foot-4, 220-pound man to run the alley like Hamilton does. He’s an absurd athlete and highly intelligent back end defender.

4. Sam Howell, QB, North Carolina: Accurate to every level of the field and efficient enough to survive when things go off structure, Howell’s prototype arm and ball placement will make him a hot commodity.

5. George Karlaftis, DE, Purdue: At 6-4, 275, Karlaftis is the defensive end prototype. He has great length, violent hands and the anchor to lock down in the run game.

6. Drake Jackson, DE, USC: Excellent hands and natural power allow Jackson to create winning angles and uproot linemen with the best of them. He can move in space for a big man too.

8. Kenyon Green, OG, Texas A&M: A mountain of an individual, Green has the type of anchor and power that teams crave from interior linemen. He’s a mauling presence with a great floor.

9. Christian Harris, LB, Alabama: It takes a special type of linebacker to start as a true freshman under Saban. Harris has the smarts, tackling and athleticism to be a franchise defender at the next level.