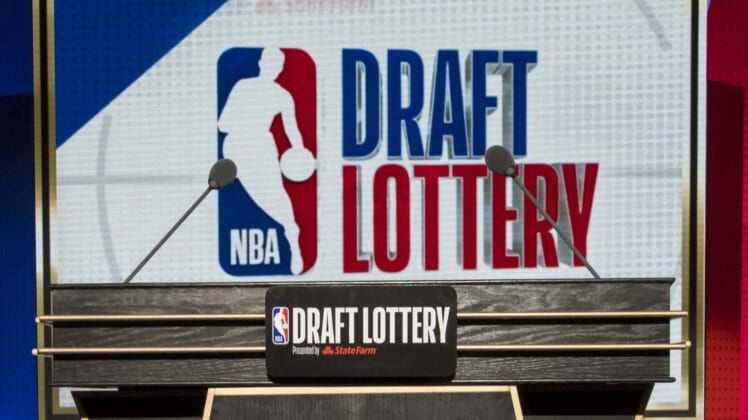 The 2020 NBA Draft is now officially set for October after the league’s board of governors approved a plan to resume the 2019-20 season on July 31 at Walt Disney World in Orlando.

Pushed back from June due to the ongoing COVID-19 pandemic, the 2020 class is seen as one of the worst in the modern history of the annual event.

The Golden State Warriors, Cleveland Cavaliers and Minnesota Timberwolves all boast the best odds to earn the top pick when the lottery takes place in August.

It’s in this, that I look at the top-10 selections and the direction each team will likely go when the draft takes place in the fall.

I seriously considered going with James Wiseman here due to the make up of the rebuilding Cavaliers roster. They boast two young building blocks in that of Collin Sexton and Darius Garland at guard. Despite that, general manager Koby Altman can’t pass up on Edwards. He could play the three in a small-ball lineup. A pure scorer, the 6-foot-5 Edwards averaged 19.1 points per game for Georgia last season. He’s favored to be the top pick.

Golden State has made it clear that it is willing to trade its first-round pick. If Wiseman is on the board, that becomes a strong likelihood. However, I’m not projecting trades here. Wiseman (7-foot-1) makes sense for the Warriors since they have three tremendous perimeter options in Stephen Curry, Klay Thompson and Andrew Wiggins. He could team up with youngster Eric Paschall to form a solid duo inside, leading to the potential trade of Draymond Green..

Hawks general manager Travis Schlenk made it his goal prior to February’s trade deadline to get some help for star young guard Trae Young. That included acquiring Clint Capela in a trade with the Houston Rockets. The former Warriors assistant GM goes back to the mold that brought Golden State multiple titles by creating his own Splash Brothers duo in Atlanta. Hayes is considered a primary ball-handler and can shoot from the outside. It would be a way to free Young up for more open shots beyond the three-point line, leading to even more dominance in that aspect of his game.

Considered by some to be the best player in the 2020 NBA Draft, Ball’s emergence can’t be seen as too much of a surprise. He stands at 6-foot-7 and can play all three perimeter positions. The youngest Ball brother also has tremendous range from the outside and can pass with the best of them. New York needs to make a splash in the draft. It must also find a running partner with last year’s lottery pick, R.J. Barrett. Ball would be just that.

Now that Minnesota has found Karl-Anthony Towns another All-Star in that of D’Angelo Russell, the team must add another big man to go with the face of the franchise. The reigning College Basketball Player of the Year, Toppin, would be just that. The 6-foot-9 forward averaged 20.0 points and 7.5 rebounds for a surprising Dayton squad last season. Having shot 39% from deep, he can also extend his game beyond the three-point line. That’s no small thing given how dominant of a scorer Towns is from all over the court.

It really is a build from the ground up scenario for Detroit’s interim general manager Ed Stefanski, who is expected to remain in charge of the team’s basketball operations, per The Detroit News. If not, the person tasked with replacing him will be taking over an expansion-level roster. Blake Griffin is the only core player, and he’s been dealing with injuries. He could also be moved. It’s in this that Detroit can afford to go best player available. Vassell is extremely underrated in the grand scheme of things. The 6-foot-6 guard shot 42% from distance for the Seminoles last season. He might not be a No. 1 option. But in a weak class, getting a core player outside the top five is a win.

Chicago made the smart decision to play stud youngster Zach LaVine at the three more often this season. It makes sense given last year’s lottery pick, Coby White, is better utilized as a two-guard. It’s also in this that the Bulls add a pro-ready ball-handler in that of Haliburton to run the offense. The 6-foot-5 point man averaged 6.5 assists and shot a surprising 42% from distance for the Cyclones last season. He’d be a perfect fit, no matter who is the head coach in Chicago moving forward.

It’s somewhat surprising that the Hornets boasted such a bad record this season. They have the talent to be much more competitive. The back-court combo of Devonte’ Graham and Terry Rozier can be elite. Meanwhile, former first-round picks P.J. Washington and Miles Bridges have shown promise. The only need here is a big man. Charlotte finds that and value in the ultra-talented Okongwu. The 6-foot-9 forward plays bigger than his size, as evidenced by the fact that he averaged nearly nine rebounds per game as a freshman for the Trojans last season.

The John Wall era is all but over in the nation’s capital. Washington will do whatever it can to get out from under his contract after he missed the entire 2019-20 season with an Achilles injury. While that might be hard, finding a future back-court partner with rising star Bradley Beal has to be the goal here. One of the top recruits in the nation last year, Anthony would be just that. The 6-foot-3 guard averaged 18.5 points, 5.7 rebounds and 4.0 assists for the Tar Heels as a freshman last season. He can be a featured piece in Washington’s rebuild.

Well, this did not go according to plan for Suns general manager James Jones and Co. All things equal, they would love to find a true point guard to team up with Devin Booker. Unfortunately, reaching for one in this scenario makes no sense. Instead, Phoenix goes with an ultra-talented Hampton who would have likely been a top-five pick had he chosen college over playing professionally overseas. Hampton can play all three perimeter positions and gives Phoenix another scorer behind the combination of Booker and Deandre Ayton.